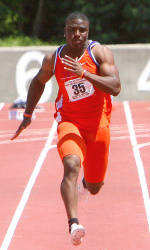 Des Moines, IA – Clemson men’s track & field qualified all three of its competitors for the finals in two events on the first day of action at the NCAA Outdoor Championships. Travis Padgett and Jacoby Ford both advanced to final in the 100m dash, while Mitch Greeley will compete in the pole vault final Friday as well.

“It was a good outing today,” said Bob Pollock, head coach of the Tiger track & field program. “Both our sprinters did a good job. Travis maybe took it a little bit too easy in the prelims, but he realized in the semis he needed to step on it a little. Then in the vault, Mitch only needed the one jump to show he’s ready to go.”

Padgett and Ford survived tough, windy conditions to make the eight-man final in the 100m. Padgett barely qualified for the semifinal round after running a 10.61 into a -2.6 (meters per second) wind. However, the five-time All-American came through with the top time of the day with a 10.20 in the first semifinal. He ran that time into another -2.6 wind. Padgett will vie for his third All-America honor in the event Friday (8:45 PM CT) and is hoping for his first outdoor national championship as well. He was fourth as a freshman in 2006, then third at last year’s meet.

Ford advanced to his first-ever final in the 100m dash. He ran into two strong headwinds Wednesday, the first of which was a -6.5 wind in the preliminary round. He then finished third in the second semifinal with a time of 10.49 (-3.8 wind). Ford was an indoor All-American in 2007 as a freshman, finishing in third place in the 60m dash.

Greeley easily moved on to Friday’s final (4:15 PM) by clearing his opening height of 17’2.75″ on the first attempt. He will be one of 15 competitors in the final, a group that will not include the nation’s top two in terms of performance heading into the meet, Jason Colwick of Rice and Jordan Scott of Kansas. Greeley has now advanced to the finals at the NCAA Outdoor Championships the past two seasons. He finished fourth last year and was national runner-up indoors.

Padgett returns to action Thursday for the 200m dash preliminaries and semifinal round. The prelims are scheduled for 5:25 PM.