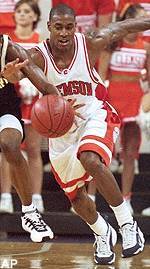 Forte provided the offensive spark the Tar Heels (10-4, 1-0 Atlantic Coast Conference) needed after a sluggish first half to improve to 46-0 against the Tigers in Chapel Hill.

The 6-foot-4 Forte scored on a 3-pointer and double-clutch baseline shot within a 28-second span midway through the second half, then fed Brendan Haywood for a dunk as North Carolina grabbed a 57-37 lead with 7 1/2 minutes left and never were threatened.

The win improved the Tar Heels to 40-7 all-time in ACC openers, while the Tigers have lost 19 of 22 in the series.

Will Solomon, the ACC scoring leader who had at least 22 points in six of Clemson’s last seven games, was held to 13 points on 5-for-19 shooting.

The Tar Heels led 33-20 at halftime and went up by 15 points less than three minutes into the second period on 3-pointers by Jason Capel and Ed Cota and the Tigers never got closer than 12 the rest of the way.

Both teams had only 11 points in the opening 11 minutes as the Tigers played a deliberate style that produced listless offense from the Tar Heels.

But Capel, Max Owens and Cota made 3-pointers during a 15-2 run as North Carolina grabbed control of the game, 26-13, as the ACC’s worst shooting team managed just 31 percent from the field in the first half.

The Tar Heels led by 13 points at halftime despite being a miserable 4-for-11 from the foul line. The Tigers were equally bad from 3-point range, going 2-for-16 in a game that had little offensive artistry.