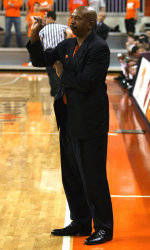 The Clemson basketball team announced the signing of four prospects to national letters of intent on Wednesday, the first day of the fall signing period. Clemson’s 2006-07 freshman class will include Trevor Booker, a 6-7 forward from Union, SC, Karolis Petrukonis (pronounced KAHR-uh-lihs), a 6-11 center from Norfolk, VA, David Potter, a 6-5 wing from Bradenton, FL, and A.J. Tyler, a 6-9 forward from Palm Harbor, FL.

Head Coach Oliver Purnell and his staff have put together the #28 recruiting class in the nation according to Hoop Scoop. Now in his third year at Clemson, Purnell has brought in four recruits that have ranked among the top 150 in the nation according to RivalsHoops.com. James Mays (103), from the class of 2004, and K.C. Rivers (117), the class of 2005, both ranked in the top 150 according to that site. This year, Potter ranks 101st on the list and Booker is ranked #121.

“I really like this class overall,” Purnell said. “Each year we try to address needs. This year, we obviously have a need for size due to the loss of Sharrod Ford and then with Steve Allen and Akin Akingbala after this season. We also have a need for a shooter with Shawan Robinson leaving after this year. I think this class has addressed those needs.”

Booker is listed by RivalsHoops.com as the 26th-best power forward prospect in the nation. The Union High School product averaged 14.7 points and 12.9 rebounds per game as a junior. An All-Region selection, Booker was named one of the top 5 players in the state heading into his senior year by the South Carolina Basketball Coaches Association. The 215-pound Booker was named all-tournament at the Pepsi Tip-Off and Red Hound Classic in Corbin, KY as a junior.

“Trevor is a tough guy and a tremendous rebounder,” Purnell said. “He showed that this summer playing against some of the best competition. He plays bigger than his size (6-7) and has very good hands.”

Petrukonis, a 6-11, 270-pound center who is ranked the #73 national prospect by Hoop Scoop, originally hails from Trakai, Lithuania. He gained notoriety over the summer of 2005 after being named to the all-tournament team at the 19 & under Nike World Juniors in France. Among those selected to that team was Connecticut sophomore Rudy Gay. Petrukonis also competed in the 18 & under European Championship summer league for Lithuania. As a junior All-State selection at the Norfolk Collegiate School, he averaged 14 points, 15.6 rebounds, 4.8 blocks, and 3.2 assists per game. Petrukonis was also MVP of the prestigious Bethel-Hampton Christmas Tournament in Virginia.

“Karolis addresses our needs up front,” Purnell said. “We will be losing Akingbala and Allen to graduation this year, so we certainly will need someone who can give us some strength on the boards. He has experience playing on the Lithuanian Junior National Team against some outstanding talent, including some top young American players. While we look for him to be able to score from inside, he has the ability to hit from the outside as well.”

Potter is ranked as the #22 small forward in the nation by Scout.com and #24 shooting guard by RivalsHoops.com. Potter is a product of IMG Academies.

“David has been playing for an elite sports academy designed to develop players,” Purnell said. “He played on the summer circuit this past year. He’s in the mold of K.C. Rivers in that he does many things well. He is long and lanky but has the look of a good basketball player.”

Tyler, a power forward at 225 pounds, was a second-team All-State selection at the 5A level for Palm Harbor University High School as a junior. He averaged 22.7 points, 10.5 rebounds, and 2.6 blocks per game. He also shot 78 percent from the free throw line as a junior. Tyler holds several school records, including single-game marks for points scored (38) and rebounds (29). Tyler is the first basketball player in the 10-year history of Palm Harbor University to sign a Division I scholarship.

“A.J. is more of a power forward type,” Purnell noted. “He is an excellent shooter with great range for a big guy. He played hurt over the summer and that showed us a lot about his toughness as well.”