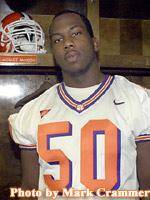 Jacquez McKissic, a 6-7, 263-pound defensive lineman from Opelika, AL, has signed a national letter of intent with the Clemson football program. McKissic is the 26th member of Tommy Bowden’s sixth class of signees.

McKissic played for Spence McCracken at Opelika High School in Alabama. He was a teammate of Clemson 2004 signee Adrian Kindred. McKissic had 43 tackles, eight sacks and an interception last year as the starting nose guard on a defense that allowed just 37 points in 12 games. It was his second season as a starter for Opelika High.

McKissic was a preseason All-South selection by PrepStar and a two-star prospect by rivals.com. He is one of four signees in this Clemson class from the state of Alabama.

“We are very pleased that Jacquez has signed with Clemson,” said head coach Tommy Bowden’s. “It was worth the wait. He is an athletic defensive lineman, an area we needed to fill with this new class. We are happy with the quality of linemen who will be joining us next year and Jacquez’s signing makes the group even stronger.”