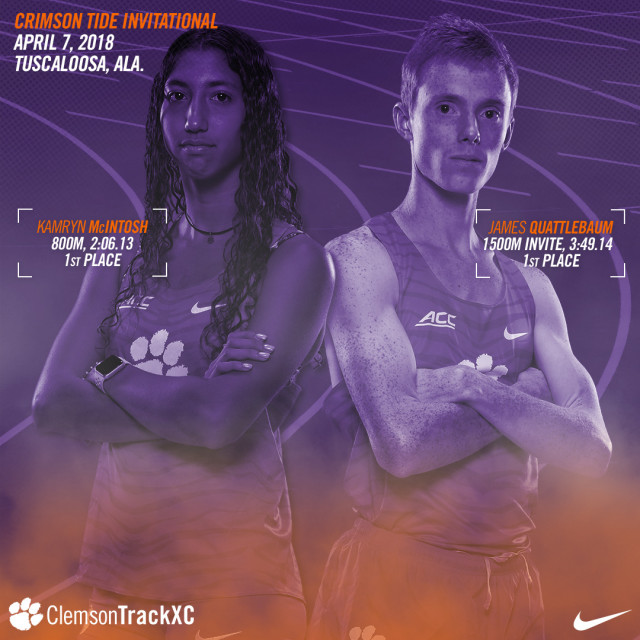 TUSCALOOSA, Ala. – In her first-ever outdoor open 800m race, Clemson freshman Kamryn McIntosh posted a time of 2:06.13 to win the Saturday’s event at the University of Alabama’s Sam Bailey Track & Field Complex. The Hillburn, New York, native, who placed first in the 800m prelims and second in the finals at the 2018 ACC Indoor Track & Field Championship, now ranks second in the conference.

Additionally, the Tigers claimed four of the top-6 finishers, including McIntosh, in the 800m. Fellan Ferguson (2:06.90), Grace Barnett (2:09.05) and Dana Maydew (2:11.88) placed second, fifth and sixth, respectively. Ferguson moved from third to second on the final 400m split, while both Barnett and Maydew jumped two spots during the final 400m.

McIntosh was not the only Tiger to claim victory Saturday. On the men’s side, James Quattlebaum was the first to cross the finish line in the 1500m Invite. The junior registered a time of 3:29.14, which is now good for seventh in the ACC.

Sophomore Ebony Williams picked up right where she left off from last week’s Texas Relays – this time in the 400m hurdles – as she PR’d with a time of 1:02.08. Williams was the third collegiate finisher after one lap.

Senior Kirk Lewis tied his personal best – also his season best – in the men’s 110m hurdles in route to placing second overall. Lewis maintains his No. 4 ranking in the ACC and now sits at No. 21 on the East Regional qualifying list.

In the women’s 200m dash, Rebekah Smith (23.87) and Torie Robinson (23.88) earned top-3 collegiate finishes. Both times for Smith and Robinson are season bests as the duo now rank eighth and ninth, respectively, in the ACC. Kendra Clarke (24.46) was the seventh collegiate finisher.

In the men’s race, Alex Sands ran his PR, achieving a time of 21.01 seconds (1.9w), luckily below the NCAA’s wind-aid standard of 2.0 m/s. Sands now ranks third in the conference in the event.

“Today was a true test on our team,” said head coach Mark Elliott. Forty-five-degree weather and strong winds are not ideal conditions for an outdoor meet, but most of our athletes competed at their best give the circumstances. This meet told us a lot about the team we have. Overall, I think we competed well.”

Up next, Clemson heads to Auburn Friday and Saturday (March 13-14) for the Tiger Track Classic. Live results can be accessed on clemsontigers.com.