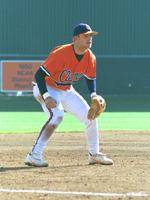 Clemson, SC- Brad McCann’s three-run homerun in the 10th inning propelled Clemson to a 9-7 victory over #4 Georgia Tech in game one of the series. Georgia Tech scored one in the top of 10th to take a 7-6 lead before McCann’s heroics in the bottom half of the inning. The extra-inning loss was the first for the Yellow Jackets since 1997, as they had won 10 extra-inning contests in a row.

The walk-off homer was Clemson’s second consecutive win on such a note, previously beating East Tennessee State on Michael Johnson’s three run shot Wednesday, also in extra innings. McCann is a native of Duluth, GA, a suburb of Atlanta.

Paul Harrelson earned the victory for the #20 Tigers, improving to 3-1 on the season. He allowed one run and struck out four in two innings of work. Brian Burks (2-1) suffered the loss for the Yellow Jackets, his first of the season.

The game started on Friday and was suspended in the eighth inning due to inclement weather. It resumed Saturday evening with Michael Johnson at the plate and one out for the Tigers.

Clemson jumped out to a 3-0 lead in the first inning. Brad McCann’s.

The Tigers increased the lead to 4-0 after Russell Triplett hit a bunt single to third. Roberto Valiente scored on the play after Yellow Jacket third baseman Mike Nickeas had an errant throw to first base.

Georgia Tech then had a six-run fifth inning to take the lead. The inning was highlighted by Micah Owings’ grand slam, his 13th home run of the year and first career grand slam.

Clemson responded by tying the game at 6-6 in the seventh inning. After Slevin reached on an error, shortstop Russell Triplett hit his fifth home run of the year and second in as many games.

The Yellow Jackets pulled ahead 7-6 in the top of the 10th inning when Eric Patterson singled to left center, stole second, and scored on Brandon Boggs’ single to right.

Clemson started the 10th inning rally with two outs. After Boggs made a great catch in deep center for out #2, Triplett dove head-first to beat out an infield single. Michael Johnson followed with a walk. Then on an 0-1 pitch, McCann drove the ball over the right-center fence for the win. It just was McCann’s second homer at home this season and ninth of the year.

The two teams will play game two of the series at 7:00 PM Saturday.