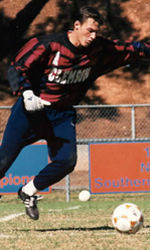 MONTREAL, CANADA -­ Goalkeeper Matt Jordan announced his retirement, Monday at Saputo Stadium, after a 13-year career at the professional level, the last four with the Montreal Impact.

Jordan, a 35-year-old American from Colorado, played eight seasons in Major League Soccer (MLS) with Dallas, Columbus and Colorado. In 117 matches, he compiled a record of 53-46-17 and 30 shutouts.

Jordan also played four seasons with the Impact, playing a total of 115 matches, for a combined 10,238 minutes played, including 42 clean sheets (regular season, playoffs, Canadian championship and Champions League). He also earned 11 victories in 16 playoff matches with the Impact and a regular season goal-against average of 0.881. Jordan finishes his career ranked second in club history for matches played, minutes played and shutouts.

“Of all the teams that I have played for in my career, my time here in Montreal has been the most rewarding,” said Matt Jordan. “I am extremely proud of what we have been able to accomplish in the last four years. I am so thankful to all of the countless people that have helped me throughout my career and with the Impact. I know without their support I wouldn¹t be here today.”

“Matt Jordan is an athlete without equal and was a real role model for young soccer players,” declared Impact president Joey Saputo. “He stood out by virtue of his qualities on the pitch, but also for his professionalism and devotion to the club.”

“Without a doubt, Matt is the true definition of what a professional player is supposed to be, on and off the field,” said Impact sporting director Nick De Santis. “He played a very important role in our most recent championships and I would like to congratulate him for a tremendous career and for everything he has done for our club.”

“Matt has always been very generous and we developed a real friendship while working together,” said Impact goalkeeper coach Youssef Dahha. “He was always a true gentleman, easy to train with and was a great leader. Matt is definitely one of the greatest goalkeepers to ever wear a Montreal Impact jersey.”

Jordan, a product of Clemson University, was the first selection (10th overall) and first goalkeeper selected by the Dallas Burn, during the first round of the 1998 MLS draft. He still holds the Dallas franchise record for wins and shutouts by a goalkeeper.

At Clemson, he was a First-Team All-American in 1997 and was named first team All-ACC that season. He finished his Clemson career in second place on the school list for most saves with 311. He started 80 matches for the Tigers during his career and was a finalist for the 1997 Hermann and Missouri Athletic Club Awards.

With Dallas, Jordan was selected to the 1999 MLS All Star team and was a finalist for the MLS Goalkeeper of the Year award, after finishing that season with a goal-against average of 1.08 and 11 shutouts. He helped the team reach the playoffs in each of his five seasons with the club.

After five seasons with Dallas, he joined first division Danish Superliga club Odense Boldklub in 2003-2004, compiling a record of 15-3-3, including nine clean sheets, with both the first and reserve teams.

Jordan played his first season with the Impact in 2007. He received the club’s Newcomer of the Year award, as well as being named to the All-League Second Team. That season, he established two new team records, shutting out the opposition in six consecutive matches and by not allowing a goal during 622 minutes of play.

The following year, he received the Giuseppe-Saputo trophy, the club’s Most Valuable Player award. He was also a finalist for the USL First Division Goalkeeper of the Year award and was selected to the USL D1 All-League Second Team for the second year in a row, after finishing the season with a league-leading goal-against average of 0.760.

In 2008, Jordan was named Most Valuable Player in the Nutrilite Canadian Championship, after conceding only two goals in four matches. In the CONCACAF Champions League, Jordan helped the Impact become the first Canadian team to qualify for the quarterfinal round, posting five shutouts in nine matches.

In 2009, he played a key role in helping the Impact capture the league championship, the third title in team history. Then in 2010, in his last season with the Impact, he led the team to the playoff semi-final round.

Finally, on the international scene, Jordan was a part of the United-States national team pool in 2000 and 2001. Was a member of the bronze-medal-winning U.S. National B Team at the 1997 World University Games in Italy, and represented his country on the U-23, U-21, U-20 and U-18 national teams.