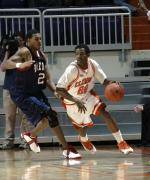 Maryland’s defense held Clemson to three points over a 10 minute and 58 second time period in the second half, leading the Terps to a 65-52 victory at Clemson Sunday evening at Littlejohn Coliseum. Maryland improved to 11-5 overall and 2-3 in the ACC, while Clemson fell to 8-9 overall, 1-5 in the ACC.

Clemson will next be in action on Tuesday night in Atlanta to face a top 20 Georgia Tech team. It will be Clemson’s sixth game this season against a team currently in the top 25 of the AP poll.

It was the first meeting for Clemson head coach Oliver Purnell against the Terps as Clemson head coach. He had beaten Maryland and Gary Williams when he was the head coach at Dayton during the 2000-01 season in a game in Hawaii. Maryland was ranked sixth in the nation in that game three years ago.

Clemson was led in scoring by Shawan Robinson, a sophomore guard from Raleigh, who was making his first career start. Robinson scored 15 points on 6-10 shooting. Robinson entered the game sixth in Clemson history in three-point goal percentage and he enhanced that 41 percent figure with a 2-4 performance from behind the arc. Robinson added three rebounds and three assists in 33 minutes of play.

Maryland was led by John Gilchrist with 15 points, five rebounds and five assists. He is there leading scorer over the course of the season. Nik Caner-Medley, who was coming off a 21-point outing against Duke, added 13 points, while Chris McCrary and Travis Garrison scored 11 points apiece for the Terps, who beat Florida on the road early this year when the Gators were ranked number-one.

Rebounding was a key statistic in the contest. Maryland won the rebounding 37-36, but held a 24-16 lead in the second half. Both teams entered the game among the ACC’s top rebounding teams, as Clemson was second and Maryland third in the league behind Duke.

The first half was close throughout as there were 14 lead changes and five ties. No team had a lead of more than four points. Clemson scored the last eight points of the half to take a 31-27 lead, much to the delight of the fans who braved an ice storm to attend the game. Clemson was led in the first half by Christie’s seven points on 3-5 shooting, and Akingbala’s six points on 3-4 shooting. Clemson had a 20-13 lead in rebounding in the first half and did not allow Maryland to score a three-point goal (0-4). Clemson’s defense forced 10 first half Maryland turnovers.

Clemson went on a 4-0 run to start the second half on field goals by Olu Babalola and Robinson and led 35-27, completing a 12-0 run for the Tigers. Clemson still led 38-31 when Robinson hit a three-point goal with 18:25 left.

Clemson led 43-38 with 13:38 left on a layup and free throw by reserve guard Vernon Hamilton. But, Maryland then turned up its full-court pressure and went on a 15-0 run to take a 53-43 lead. Robinson cut the lead to seven at 53-46 with 7:18 remaining on another three-pointer.

“The rebounding was the key stat of the game,” said Clemson head coach Oliver Purnell. “We did a fairly good job against Maryland defensively when they were in their set offense. But, we gave up too many second shots in the second half. And, we let them get out on the break a few times and score in transition. We were +7 in rebound margin in the first half and led by four. In the second half we were -8 in rebounding and were out-scored by 17. It was the difference in the game.”