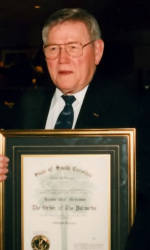 Funeral arrangements are as follows:

McKeown’s restaurant was a legendary gathering place for Clemson fans, coaches and student-athletes since it opened in 1956. Mac opened the restaurant that year, just after he had earned an undergraduate degree in mechanical engineering from Clemson.

Four years ago, ESPN’s Todd Blackledge began his “Taste of the Town” series in conjunction with his Saturday night football game he broadcast assignment. The first restaurant he featured was “Mac’s Drive-In.”

McKeown received the Order of the Palmetto from the state of South Carolina on Feb. 13, 1997. It is the highest honor presented to an civilian by the state.

Just hours prior to his death, McKeown was honored by over 100 people who gathered at his room at the AnMed Health Center in Anderson, SC. He was honored with a proclamation read by Clemson City Councilman Jeremy Wright, designating December 30, 2009 as “Mac” McKeown Day. Mayor Larry Abernathy presented him with a medallion and Clemson University President James Barker presented a plaque representing the Clemson ring.

McKeown also received a phone call from Clemson Head Coach Dabo Swinney, who was with family in Alabama.

The restaurant is a virtual sports memorabilia museum with many autographed photos of famous Clemson athletes and coaches on the wall behind the counter. One of the athletes on the wall is former Clemson point guard Bobby Conrad, who quarterbacked Clemson to the Elite Eight of the NCAA Tournament in 1980.

“Mac’s Drive-In was a home away from home,” said Conrad, now a Federal Judge in North Carolina. “I was a freshman from Chicago in 1976 and he made me feel welcome.

“In 1980 we beat Duke when they were number-one in the nation. My dad heard the score on the radio in Chicago. He pulled off the road to a phone booth and immediately called Mac’s Drive-In. He knew I would be there….and I was.

“After I proposed to my wife (Anne) that year, our first meal was at Mac’s.”

While “Mac’s Drive-In” was a favorite for thousands of Clemson fans, coaches and players, it was a stopping place for visiting fans and even some athletes. In 1975, while on his way to winning the ACC men’s tennis championship at Clemson, famed Maryland basketball and tennis star John Lucas ate many of his meals at “Mac’s Drive-In.”

“One afternoon, he even went behind the counter and served customers iced tea,” recalled Al Adams, then Bob Bradley’s assistant in the sports information office. “That was the down home atmosphere at Mac’s. John felt right at home in there after just a couple of days in Clemson.”