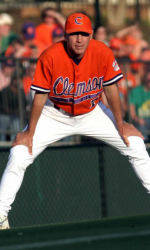 Clemson, SC – Clemson Head Coach Jack Leggett has been named Atlantic Coast Conference Coach of the Year. The Tiger mentor has led Clemson to a 43-13 record so far this year, including a league best 24-6 ACC record.

This is the third time Leggett has won the honor, as he also was presented the award in 1994 and 1995, his first two seasons as the program’s head coach. Clemson is ranked third in the nation byCollegiate Baseball and Baseball America his week, and is the number-one seed in this week’s ACC Tournament.

“This award is a testament to the hard work of our players and assistant coaches this entire season,” said Leggett. “It is truly a team award. This is a great honor and I am proud to be associated with this team and coaching staff.

“It is especially gratifying because the ACC is as strong as it has ever been this year. We have a great group of successful and respected coaches in the ACC.”

Leggett has the Tigers riding a 15-game winning streak entering the ACC Tournament, the longest winning streak by a Clemson team since 1996. The 24 victories in ACC games is a school record, as is the 20 overall wins against top 25 teams this year. Overall, Leggett has a record of 598-256 at Clemson over 13 years, and a 975-546 mark overall in his 27 years as a Division I head coach.