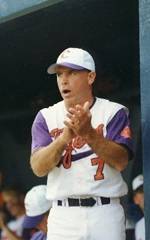 Leggett Gets Win No. 700 In Tigers’ 12-8 Baseball Win Over Duke Sunday

DURHAM, N.C. — No. 6 Clemson used a 22-hit offensive attack and solid pitching performance from Ryan Mottl to defeat Duke 12-8 Sunday at Jack Coombs Field to finish off the series sweep of the Blue Devils. The loss drops Duke to 4-14 in the ACC and 14-32 overall while Clemson improves to 11-4 in the ACC and 35-10 overall.

Tiger Head Coach Jack Leggett picked up win #700 in the game. He has a 700-412 record in his 21st season as a Division I head coach. Ryan Mottl added another milestone, as he picked up his 30th win as a Tiger, which moved him ahead of Kris Benson into sole possession of third place in the Tiger career win list. Mottl pitched 7.0 innings, allowing six hits and three runs. Mottl improved to 7-2. Duke starter Ryan Caradonna (5-8) suffered his second loss of the series.

Clemson took advantage in the fourth inning as it went up 3-1 on Ryan Riley’s RBI double to left field and Justin Singleton’s RBI groundout. Clemson went up 6-1 with three runs in the fifth. Leadoff hitter Brian Ellis reached base on an error, Khalil Greene singled and both scored on Jeff Baker’s RBI double to right center. Michael Johnson’s sacrifice fly scored the other run.

Clemson scored five runs in the seventh and one in the eighth to go up 12-3. But Duke battled back with five runs of its own in the bottom of the eighth. David Mason led off the eighth with a walk followed by J.D. Alleva’s single. Jeff Becker’s double drove in Mason and Larry Broadway’s groundout drove home Alleva. After Kevin Kelly and Troy Caradonna walked to lead the bases, Brian Patrick drove in two runners with a double to left field. Caradonna scored on a wild pitch to make it 12-8 but that was the closest the Blue Devils came.

Clemson’s 22-hit outburst was the biggest of the season. Clemson also totaled 45 hits in the three games and committed just one error as well. The sweep was Clemson’s first on the road in the conference since 1996 when the Tigers swept North Carolina in Chapel Hill.

Clemson next plays Western Carolina in Asheville on Wednesday at 7:00 PM.