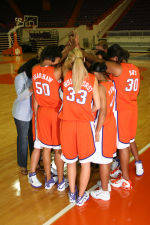 CLEMSON, SC – The Clemson women’s basketball team (0-1) will play host to the College of Charleston (1-0) on Monday night at Littlejohn Coliseum. The teams are scheduled to begin play at 7:00 pm. Fans across the state will be able to catch the action on the airwaves with the Clemson Tigers Sports Network. The network will broadcast its first Lady Tigers’ game of the 2006-07 season, as Don Munson will begin his third season calling the play-by-play and Kanetra Queen will again provide color commentary.

The game will also be available on livestats by accessing the GameTracker link on www.clemsontigers.com.

Members of the military and their families will receive free admission to the game, as will any fans with a ticket stub from Saturday’s football game against NC State.

Red-shirt freshman Christy Brown led Clemson with 17 points against Arkansas in the season opener, while junior Tasha Taylor totaled a career high 16 points for the Lady Tigers. Carrie Whitehurst posted a team-high 10 rebounds and the figure set a personal best for the senior from Duluth, GA.

Series History Clemson has faced the Cougars of the College of Charleston 15 times in its history. While the Cougars hold a slight 8-7 lead in the series score, the Lady Tigers have won the last six meetings between the schools. The most recent was an 88-53 Clemson victory at Littlejohn Coliseum during the 1995-96 season. The win bettered the Lady Tigers’ record to 6-2 in games played on their home court.

Scouting the Cougars The College of Charleston opened its season with a 63-46 win over South Carolina State on Friday night in Charleston, SC. Sophomore Nikki Williams scored over one-third of the Cougar’s total points with 23 in the contest. Melissa Chambers and Erica Smith collected 11 and 10 rebounds, respectively, while Jill Furstenburg handed out a team-best six assists for the night.

The Cougars return four starters from their 2005-06 team that finished with an 11-17 overall record.