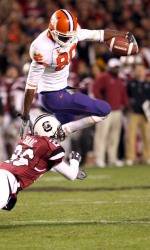 Kelly to Remain at Clemson

Clemson, SC – Clemson first-team All-ACC wide receiver Aaron Kelly announced Wednesday afternoon that he will return for his senior season at Clemson. The native of Alpharetta, GA is the fourth Clemson underclassman who had applied for an evaluation from the NFL, to announce he will return to Clemson over he last two days. On Tuesday, Michael Hamlin, Cullen Harper and Dorell Scott announced plans to remain at Clemson to the 2008 season.

“This is a decision that is best for me and my future,” said Kelly. “Getting my degree is very important. If I had turned professional, I would have left school now to train and would have had a lot of hours to finish. I am also excited by the prospects for this program next season.”