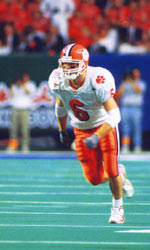 Hi Justin, Who has the best hands on the current Tiger squad? I know speed and size are important, but every great team also has that possession receiver like you were who can be counted on to catch the ball EVERY time in clutch situations. I’ll miss you out there this year. GO TIGERS!Joe Redlinger Pittsburgh, PA

I think that Kevin Youngblood has great hands. His hands are very big which makes it easier to catch the football. His size and speed allows him to take advantage of smaller DB’s. He isn’t considered a “possession” receiver, but I think that we will be able to count on him to make the important catch.

Justin, Is it hard being assistant? How will you feel during the game?Jackson Vaughan Norcross, GA

I am not sure how I will feel during he game. I know that I will miss playing in front of 85,000 people on Saturdays. I don’t miss football too much right now because the players are just running and working out everyday. This is the part of the season that is no fun, but it also one of the most important parts of the season. I am sure that I will miss the competition aspect of playing on game day.

Hi Justin! You are one of the few wideouts that played with Nealon Greene and Woody Dantzler, two of Clemson’s finest quarterbacks. How do they stack up against each other?Samantha Carruth Clemson, SC

Both players are very good quarterbacks. I think that Nealon’s best attribute was he was a great leader. When Nealon spoke everyone on the team listened. Woody is so great because he is usually the best athlete on the field. Both players loved to compete and they also hated to lose. I would trust either one of those players running my offense.

Justin, In breaking down film, how good does UCF look? I know they always play the big boys tough. What do the Tigers need to do in order to open up the season with a W?Dale Mouster Hartwell, GA

UCF looks extremely fast on defense. I haven’t watched them on offense because I am concentrating on the defensive side of the ball. They run to the football very good, and looked to be coached extremely well. Their big wins over the past couple of years show that they are capable of beating anyone. I think that we need to play an intense game on both sides of the ball.

Justin, Which receiver do you see stepping up this year and taking charge on offense?Jon Utlas Jacksonville, FL

I think that Jackie Robinson will have a very productive year for Clemson. He has been around the system long enough to understand exactly what is going on. He is a great leader and loves to play football. Jackie competes as good as anyone I have ever seen, and I believe that he will step up and take charge of the receivers this year.

Justin, Alright, we want to know. Woody or Willie? Who brings more to the offense?Ben McClung Greenwood, SC

Justin, Can you put into words what 2000 was like after suffering through 1998?Bob Richt Clemson, SC

The 2000 season was a great way to end my career. I was pleased as a senior to leave the program with a nine win season. We would like to have won all of our games, but it was just not to be. 1998 was a hard season to go through because we lost a lot of games that we should have won. Football is a lot more fun to play when the team is winning, just as I am sure that the fans enjoy the games more when the Tigers are successful.

Justin, How do you feel about this year’s offensive staff (Scott/O’Cain)? Do you see there being much difference in the offensive scheme? Joe Mayo Easley, SC

I think that this staff is perfect for our offensive. We have coaches that have tons of experience in different styles of offenses. I don’t see the offense changing a whole lot, but I am sure there will be a couple of small changes. All of the coaches on the staff are people that the players enjoy playing for. The staff that we have will do a good job getting the team in a position to win football games.

I enjoyed it, everyone. Go Tigers! Justin Watts

Next week’s guest on “Ask The Tigers” will be three-time Clemson All-American and starting innside linebacker for the Seattle Seahawks, Anthony Simmons.