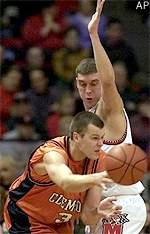 When Andrius Jurkunas said “I do” to play basketball at Clemson, Larry Shyatt would have never imagined that several years he would hear Jurkunas utter those same words. Over his career Jurkunas, a 6’9″ fifth-year senior from Kaunas, Llithuania, has been asked to play every position on the court. While his position on the Clemson team has been like a revolving door, his unique bond with Shyatt has been a constant.

Shyatt first noticed Jurkunas in 1993 while playing in the Albert Switzer World Games in Germany. At the time, Shyatt was an assistant coach under Rick Barnes at Providence and ironically it was with former Clemson Head Coach Bill Foster that Shyatt made the recruiting trip to Germany. Although Jurkunas was only 15, he more than held his own against some of the best high school competition in the world. In fact, Jurkunas was named the most valuable player of that tournament.

Shyatt took an immediate interest in the young Jurkunas, but there was one problem. “On the last day of the tournament I noticed that Andrius’s coach was wearing a Seton Hall sweatshirt,” Shyatt recalls. “I thought, oh no, we are going to lose another one.”

Jurkunas’s coach informed Shyatt, however, that he was only wearing the sweatshirt because one of his former players was playing with Seton Hall. He also told Shyatt that he thought Jurkunas would be interested in coming to the United States to finish high school and attend college somewhere other than Seton Hall. After several follow up trips by the Providence coaching staff, Jurkunas decided to leave his home in Lithuania and attend high school in the United States. In addition, he made a verbal commitment to the Providence coaching staff to play basketball for the Friars after he graduated from high school.

Speaking almost no English and having never been to the United States, the16 year old Jurkunas left his family in 1993 and embarked on a trip that would dramatically change his life.

After landing in the United States, Jurkunas enrolled at St. John’s at Prospect Hall in Baltimore, MD for his final two years of high school. During his junior season, Jurkunas averaged 20.1 points and 10.3 rebounds per game. His senior season, Prospect Hall finished the year ranked second in the nation and Jurkunas averaged 16 points and 5.3 rebounds per game. Jurkunas developed the reputation of a big man who could shoot from three-point land and noted recruiting analyst Bob Gibbons ranked him as the 45th best high school player in the country.

Also during his senior season, Jurkunas once again found himself faced with a decision that would effect his future as a student and a basketball player. That year Rick Barnes and his coaching staff, including Shyatt, left Providence to coach at Clemson. After several discussions with Shyatt and the rest of the staff, Jurkunas decided that he too would join the Clemson basketball team after he graduated from high school. “One of the main reasons that I decided to go to Clemson was because of my relationship with Coach Shyatt,” says Jurkunas. “I have always felt comfortable around him and I know that he will always be there if I ever need someone to talk to.”

In 1995, Jurkunas enrolled at Clemson and during his freshman season he made an immediate impact for the Tigers. He set the Clemson record for three-point goals by a freshman with 51 and he ended the season ranked sixth in the ACC with a .421 three-point percentage. Also that year, he was the only player in the ACC to rank in the top 10 in three-point percentage and blocked shots. Clemson advanced to NCAA tournament that season and Jurkunas led the Tigers with five three-pointers and scored a career high 19 points in their first round game against Georgia in the West Regional.

After a stellar freshman campaign, injuries limited Jurkunas’s playing time over the next two seasons. He was forced to sit out the entire 1997-1998 season because of calcium deposits in his right knee. For the first time in his life Jurkunas, who had now been away from home for almost five years, began to question himself as a student and a basketball player. He began doing poorly in school and often talked of returning to Lithuania. The Calender year1997 was a very difficult year for Jurkunas but it did not take long for Shyatt to recognize there was a problem.

“I was not pleased with the direction Andrius was heading so I asked him to come over to my office and talk to me about what was going on,” remembers Shyatt. “It was a very lengthy conversation with a great deal of hollering and yelling between both of us. It was a very emotional time and although we were not able to fix everything in that one night, I think it brought us even closer together.”

Several months later Jurkunas’s friend and confidante on the Clemson coaching staff left Clemson to become head coach at Wyoming. Shyatt’s departure only added to Jurkunas’s frustrations and just when everything seemed to hit rock bottom he fell in love with a girl that would also have a tremendous impact on his life. She was a fellow Clemson student named Jill Garrard and in October of 1998 she and Jurkunas became engaged.

In 1998, Rick Barnes left Clemson to become the new head coach at the University of Texas and Shyatt was named the new head coach at Clemson. Although he had only been at Wyoming for one year, the news of Shyatt’s return to Clemson was greeted with a big smile from Jurkunas. “When Coach Barnes left for Texas people began saying that Coach Shyatt was going to be our next coach. I was really hoping that he would come back. When he did finally get the job I was very excited,” recalls Jurkunas.

Upon his return to Clemson, Shyatt met with each player on the team individually. It was during these meetings that he noticed a renewed enthusiasm in Jurkunas. “When I returned to Clemson the change in Andrius was amazing. I was extremely proud of his maturity level. He was making A’s and B’s in school and he was tremendously focused on earning his degree. I truly believe that Jill and her family were the main reason for the change,” Shyatt feels.

The 1998-1999 season saw not only the return of Shyatt but also the return of a healthy Jurkunas to the Clemson lineup. He started the final 18 games of the year and helped lead Clemson to the finals of the NIT. He had 11 double-figure scoring games that year and made 46 percent of his three-pointers in league play. That percentage placed him fourth best in the ACC for league games.

While Jurkunas was once again happy playing basketball, he was also experiencing tremendous happiness off the court. He and Jill had fallen in love and the two were married in Charleston in May of 1999. As he and Jill made plans for the wedding it came as no surprise when Jurkunas asked his head coach to be in his wedding. “Coach Shyatt has always stressed the importance of family with our team so I thought it was only fitting that he and his wife be in my wedding,” Jurkunas says.

Like Jurkunas, Shyatt knew the wedding was a very special occasion. In fact, in his office still sits a framed picture of he and Jurkunas in their black tuxedos. “I was thrilled when Andrius asked my wife and I to be a part of their wedding. I knew that once I became a head coach my personal relationships with the players would be different than when I was an assistant coach and that was very scary to me. So when I was able to be in the wedding it was extra exciting for me.”

This season, while playing half of the year with a broken wrist, Jurkunas has had to take on more of a leadership role with a very young Clemson team. As in the past, Shyatt has been very open with Jurkunas about what he expects from him. “He basically told me that I must set a good example for all of our younger players,” says Jurkunas. “I know that if they have any questions or problems concerning school or basketball that I must be there for them.”

Jurkunas responded at midseason when his thumb was finally healed. In a four-game stretch he connected on 19-34 shots from the field and made 9 of 17 three-point goals. He led Clemson to a 70-58 win over Georgia Tech with his first career 20-point game (he scored 21) and also pulled in seven rebounds. On top of that, he held Jason Collier to 10 points on 3-10 shooting, 40 percent below his average.

As he became more and more healthy, his stats became better and better. In the final ACC road game of the year, Jurkunas made 6-7 three-point shots at NC State, scored 23 points and led the Tigers to their first ACC road win in two years, a 66-63 triumph in NC State’s new basketball facility. He also guarded Anthony Grundy of NC State on their last possession and blocked a potential game winning shot.

Andrius Jurkunas will continue to do whatever he can to help the Clemson basketball team improve as this year concludes. While he is still unsure of his plans after graduation this May, it is safe to say that Larry Shyatt will play an important role in any decisions that he will make.