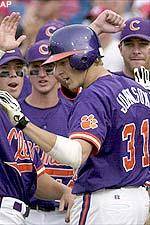 Johnson Will Return for Senior Season

Clemson, SC – Fifth-year senior first-baseman Michael Johnson (Georgetown, SC) will return to the Clemson baseball team in 2003 after attending class Wednesday. Johnson was a second-round pick (54th overall) of the Padres in June. Johnson hit .384 with 25 homers and 81 RBIs in 2002, as he garnered second-team All-America honors by ABCA. He was also a First-Team All-ACC selection and was named to the all-tournament team of the 2002 College World Series. Johnson has 46 career homers, already sixth-best in Tiger history.