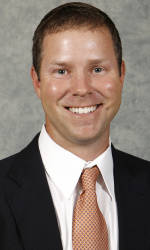 Horton comes to Clemson after four years (three seasons of competition) as the head coach at Tulane. He re-started the program after Hurricane Katrina halted it from the fall of 2005 until the fall of 2008.

“I would like to personally thank Dr. Terry Don Phillips, Kyle Young and Coach Larry Penley for this amazing opportunity,” said Horton. “Very few times are coaches fortunate enough to coach at their dream job. Clemson University is my dream job, and I am honored to be a part of such an elite university and athletics program.

“Clemson Golf has a wonderful reputation in the golf community. I am so excited to work with Coach Penley, as he is easily one of the best and most well respected coaches in the country. There is a great expectation with the golf program. I am looking forward to working extremely hard in putting together a successful women’s program that the Clemson family will be proud of!”

The Green Wave finished in the top three in 14 of 33 tournaments over the three-year period. He had 14 all-conference players on the course and 17 on the Commissioner’s Academic Honor Roll in those three years. He coached the Conference Player of the Year each of his three years with the program.

“J.T. is a perfect fit for this job and we are fortunate to have a coach of his caliber and experience serve as our first women’s coach,” said Penley. “I have known him for a long time. He is from Clayton, GA (just 30 miles from Clemson) and used to come here in the summers to talk about the coaching profession.

“He is a great fit for this job on a number of levels, but an important one is his experience when it comes to starting a program. He was faced with that at Tulane after Hurricane Katrina. He knows what it takes. He brought Tulane to instant success with a conference championship and a top 20 finish in his first year as a head coach.

“He is very familiar with our men’s program and knows how we do things. We had a lot of candidates for this position, including many other head coaches. But, J.T stood out.”

Horton was named head coach of the Tulane women’s program on July 4, 2007. He established the program through recruiting the first 13 months, then put a quality team on the course for the 2008-09 season.

Five of his six first-year players were named to All C-USA first, second or third teams, and Linn Gustafsson was tabbed the Conference USA Player and Newcomer of the Year, while freshman Daniela Holmqvist captured the C-USA championship individual medalist honors en route to earning the league’s Freshman of the Year honors.

Horton’s second year mirrored the success of his rookie season. He led the Green Wave to its second straight C-USA Championship and a return trip into the NCAA Championship, where his team posted an 18th-place national finish.

His sophomore season as a head coach featured a school record three tournament victories, including the Conference USA Championship, which was won in record fashion. The team posted a 54-hole score of 858, the lowest team tournament score in school history.

Under his leadership, five Green Wave players were named to the 2010 All-Conference USA teams, including three to the first team, and for the second straight season he has coached the C-USA Player of the Year with Janine Fellows’ Co-Player of the Year selection.

Off the course, six of his seven players were either members of the Conference USA Commissioner’s Honor Roll, earned the C-USA Commissioner’s Academic Medal or is a member of Tulane’s 3.0 Club. The group included Linn Gustafsson, who was named to the NGCA All-Scholar Team in 2010. She also made the team in 2011.

Last year the team had six top 10 finishes in 10 tournaments to qualify for the NCAA regional for a third straight year. The team finished 17th in the final Golfstat computer ranking. He led Tulane to a third-place finish in Conference USA and once again he coached the league’s top player, Maribel Lopez Porras.

Porras qualified for the NCAA national tournament as an individual and was a Golfweek honorable mention All-American. Four more players made one of the three All-Conference USA teams, and Meghan Chapman was named the top newcomer in the conference.

A two-time All-American as a student-athlete at Berry College in Rome, GA (1995-99), Horton joined the Green Wave family following two years at Georgia Southern where he served as an assistant coach for the Eagles’ men’s golf program.

Horton helped the Eagles win the 2006 Southern Conference Championship, where all five golfers finished in the Top 25 individually and the team won the title by 12 strokes over College of Charleston. The team also advanced to the NCAA East Regional finishing one spot out of qualifying for NCAA National Championship.

During the 2006-07 season, GSU posted four top five team finishes including a runner-up showing at the SoCon Championship.

As the program’s recruiting coordinator, Horton helped Georgia Southern ink one of the top recruiting classes in school history in 2007. He also oversaw the team’s player development, workouts and physical conditioning, as well as serving as the liaison to the director of student-athlete services for academic progress.

A four-year letterman at Berry College, Horton was a first-team NAIA All-America as both a junior and senior and claimed first-team All-TranSouth Conference honors all four years. He helped the Vikings win the conference title from 1996-1999 and capped off his career as a member of the NAIA National Championship team in 1998.

Individually, Horton won six collegiate tournaments, including TranSouth Conference medalist honors in 1997 and 1998. He was selected to represent the U.S. in the 1998 World University Golf Games in San Lameer, South Africa.

No stranger to balancing academics and athletics, Horton graduated with a business degree in 1999 and earned all-TranSouth Conference Scholar Athlete honors in 1998 and 1999.

Following his successful collegiate career, Horton played professionally on several mini-tours for five years. In 2002, he won his first professional event, The Harbor Club Classic Championship, on the DP Tour with a 19-under par 269 (63-70-71-65). He was an exempt member of the NGA Hooters Tour from 2000-2004 and reached the second stage of PGA Tour Qualifying School in 2000 and 2001.

Prior to joining the GSU staff, he served as the head golf professional and assistant general manager at Horseleg Plantation County Club (Rome, Ga.). At Horseleg, Horton managed all golf operations and assisted the general manager in supervising department heads and employees for golf, swimming, tennis and fitness. Horton developed and oversaw a Ladies Golf Association and Junior Golf Academy in addition to managing the Men’s and Senior’s Golf Associations.

A native of Clayton, Ga., Horton is married to the former Sydnie Brianne Ruland of Rome, GA. They have one son, Griffin, who was born in January of 2011.