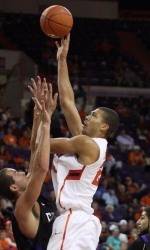 CLEMSON, SC – Milton Jennings is going to do everything he can to help the Clemson Tigers win basketball games. The junior from Charleston, SC definitely did that Friday night, as he scored a career-high 22 points and grabbed a career-best 14 rebounds in leading Clemson (3-2) to a 59-49 victory over Furman (3-2) in front of at Littlejohn Coliseum.

“I just answered him. I finally stepped up. I’m a junior this year, but I feel a little bit of seniority, if you will. I saw that my teammates weren’t playing as well, so I decided to go ahead and go.”

Jennings went, indeed. Fourteen of his 22 points came in the opening 20 minutes as he helped Clemson rally from a 9-0 deficit the start the game. By the end of the half, the Tigers tied the game at 24-24 as they scored eight of the half’s final nine points. Jennings finished the first half 4-6 from the field and 4-5 from the foul line, while also grabbing six rebounds.

“Milt had a great game today,” said Clemson guard Andre Young, who scored 15 points on 4-8 shooting, including 3-6 from behind the arc. “He did a little something of everything. He scored the ball. He secured the ball. He rebounded well. He is definitely one of our main contributors on this team.

“We knew what he was capable of doing, it was just a matter of him having the confidence to go out and do it, and today he did.”

Jennings’ confidence got the Tigers’ going in the second half. With the game tied at 28-28, Clemson used a 9-0 run to grab control of the game for the first time. Young contributed to with a couple of three-pointers and then a leaner in the lane by Smith to make the score 37-28.

“It’s a big adjustment for these guys in terms of the confidence of everybody looking at you to make a big shot,” Brownell said about his upperclassmen stepping up. “Whether it’s Tanner, Andre, Devin (Booker) or Milt, those four guys need to be the guys to make big shots and grab a hold of opportunities.

“Andre did some of it last year, but mostly it was Demontez (Stitt) and Jerai (Grant).”

After getting little production from Smith and Booker in the first half, the two finished the night with eight points apiece to go along with four rebounds by Booker and three from Smith.

Booker spent most of the first half in foul trouble after picking up two early fouls. About that same time is when Jennings decided it was time for him to step up. In addition to his 22 points and 14 rebounds, he also finished the night with only one turnover, while producing two steals.

“That’s the biggest thing for me,” he said. “In the first game, I had five turnovers. When I saw that, I thought, `No more of that for the rest of the season.’ Since then, I have done pretty good with that. Since last year, there were two things I knew I had to do better – closing out and guarding my man, which I think I’m doing a better job of this year, and not turning the ball over.”

Furman was led by Bryant Irwin’s 13 points and seven rebounds. The Tigers return to action on Nov. 29 as they travel to Iowa as part of the Big Ten/ACC Challenge. The game will tip at 9:15 PM Eastern time and will be televised by ESPNU.