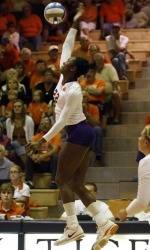 Clemson takes on Maryland on Saturday at 7:00 pm in Jervey. The match is free to attend.

Friday’s win stretched Clemson’s win streak over the Eagles to eight, and they are now 13-2 all-time against BC.  Clemson took advantage of 10 Boston College service errors, and had seven aces to fuel several runs that gave Clemson a second straight home win, and improved to 7-1 in Jervey this season.

Clemson’s setters, Hannah Brenner and Kamryn Sherman were extremely efficient, combining for 47 assists in 109 sets for a .473 assist percentage. Sherman had 21 assists on 41 attempts. Brenner had a fourth straight double-double, as she registered 26 assists and 10 digs. Libero Natalie Patzin was aggressive also, tallying 23 digs and a career-high six assists.

Though the setters were able to spread it around, it was the hitters’ ability to finish tonight that ultimately helped the Tigers win. The primary hitters had 30 kills in 79 swings against just four errors.

Boston College claimed the first set, 26-24, despite Clemson’s match-high .467 hitting. The Tigers had four service errors to BC’s zero. Clemson led as late as 18-17, but a 6-0 BC run gave the Eagles the edge they needed. Up 24-21, Clemson rallied for three straight to tie it, but a kill from Krystle Higgins halted the run, and an error from Adeleye clinched the set.

The Tigers looked a bit sluggish to start the second set as the teams traded points until BC took a 15-13 lead, prompting a Jolene Hoover timeout. Whatever she said in the timeout worked, as Clemson outscored the Eagles, 12-4 after the break to take a 25-19 win. Clemson recorded a whopping six blocks during that 16-point run, with rand getting in on four of them, and Yaz on three. Clemson held BC to just .077 hitting in the set, and had no service errors.

Clemson sent a strong message early in the third set coming out of intermission. When a Courtney Castle kill knotted the set at 5-5, it looked to be another tough one. But, with Kristin Faust serving, Clemson went on a ten-point run, the longest of the season. During the run, the Eagles used both timeouts, and four different Tigers had kills. The run ended when Faust put her 10th serve into the net, giving Clemson a 15-6 lead. The Eagles would get no closer than seven the rest of the way, as Clemson won, 25-13 when Faust posted the final point on a kill.

The fourth set was much tighter, but it looked early like Clemson might run away with it. The Tigers led, 18-12 after consecutive Faust kills, but the Eagles went on a 12-5 run to set up set point at 24-23, and forcing a fifth set. But Clemson went to Sandra Adeleye, who had a quiet evening for the most part. She tipped on just out of reach of the back row player to knot it at 24-24, and then she got in front of a Melissa McTighe attack for a solo block, setting up match point. Adeleye would then team with Brenner for a block of Castle to clinch the match with a  26-24 win.