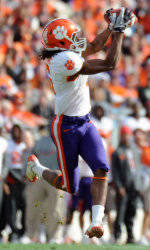 Hopkins is one of nine ACC players on the list. He is joined by Travis Benjamin of Miami (FL), Jarrett Boykin of Virginia Tech, Kris Burd of Virginia, Chris Givens of Wake Forest, Dwight Jones of North Carolina, Bobby Swegert of Boston College, Donovan Varner and Conner Vernon of Duke.

Clemson’s schedule will be a challenge of the defensive secondary as six players on the Biletnikoff List will face the Tigers this year. In addition to Boykin, Givens, Jones and Swegert, the Tigers also face South Carolina’s Alshon Jeffery and Auburn’s Emory Blake, who are both on the list.

Hopkins led Clemson in receiving last year with 52 receptions for 637 yards and four touchdowns. He had three 100-yard receiving games over his last four contests, including the Meineke Car Care Bowl against South Florida when he had nine receptions for 105 yards. The nine receptions established a Clemson record for catches in a bowl game. He had at least five catches in each of the last five game. His 52 catches were the most by a first-team freshman and second best in history among all freshmen (red-shirt or first year).