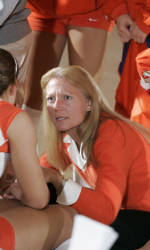 “There have been so many special wins over the years and they include so many players and assistant coaches,” said Hoover. “I just look at it as another victory for the program.”

Clemson erased a 16-8 deficit in the fourth game and rallied for the final three points of the frame to post the victory.

“We had a great comeback in the fourth game,” Hoover said. “We really needed this win after last night’s loss, and I am proud of how hard we battled.”

Trailing 24-17, the Tigers’ cut the Hokie lead to one after a six-point run that included three kills by Danielle Hepburn. Clemson then won the game, 30-27, on an ace by sophomore setter Kelsey Murphy.

Hepburn tallied a season-high 22 kills for the Tigers on Saturday night while hitting a .405 percentage. The junior from Miami, FL also posted seven block assists, as Clemson totaled 19 as a team against the Virginia Tech.

Meghan Steiner added six blocks, including two solos, while Jeannette Abbott recorded a personal-best with three block solos and tied a career high with six in the match.

Meanwhile, setter Didem Ege’s 24 digs against Virginia Tech put her over the century mark for the statistic as she now boasts 1,005 in just her sophomore season.

Clemson jumped out to an 11-5 lead in the opening game, forcing a Tech timeout. The Tigers extended their advantage to eight by 22-14, forcing the Hokies to use their second timeout, but Clemson dominated the remainder of the game, using an 8-3 run to close out the frame, for a 30-17 win.

Junior Sarah Muñoz landed back-to-back aces late in game two, to even the score at 29 all. But the spark wasn’t enough, as a kill and block from Clemson provided the Tigers the two points they needed for a 31-29 win.

Game three also featured a 29-29 score. A Clemson service error and then a Hokie attack error knotted the score again at 30, before a Tiger attack error and a block by Willoughby and Horowitz gave the Hokies their first win in the match at 32-30.

The Tigers will return to Jervey Gym on Thursday, Nov. 8, as they will play host to Wake Forest at 7:00 pm.