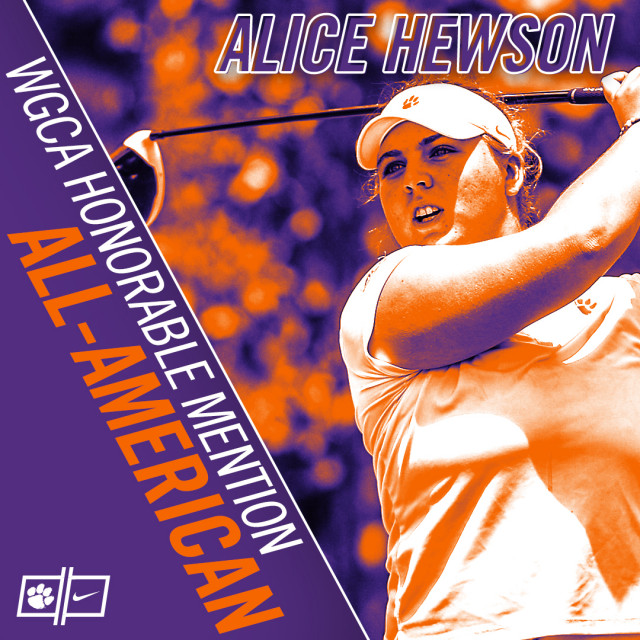 Clemson, S.C.—Clemson golfer Alice Hewson has been named an honorable mention All-American by the Women’s Golf Coaches Association.   The announcement was made from Stillwater, Okla., where the women’s national championship was played this week.

Hewson is the first Clemson women’s golfer to be named a two-time All-American. She was a third-team selection by the Golfweek last year. She is the second Clemson player to receive All-America recognition from the WGCA. Ashlan Ramsey was an honorable mention All-American in 2013-14 by the organization.

Hewson, a junior who has been named All-ACC three times, led Clemson with a 72.10 stroke average this year.   She had five top 10 finishes in her 11 tournaments, 15 under-par rounds and seven rounds in the 60s     Her season included a victory at the Clemson Invitational, her third career win, and a third place finish at the Schooner Classic. She had a Clemson record tying 65 in the third round at that tournament.

Hewson will begin her summer by playing in the Curtis Cup for the second straight year for the Great Britain and Ireland team. That competition will be held June, 8-10 in Scarsdale, NY.