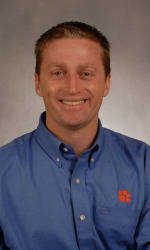 CLEMSON, SC – Hershey Strosberg has been named Head Women’s Soccer Coach at Clemson, Assistant Athletic Director Kyle Young announced on Monday, January 14. Strosberg will take over the helm of the Lady Tiger program after working as an assistant women’s coach at the University of Virginia for seven seasons.

“I want to thank Dr. Phillips, Kyle Young, Trevor Adair and the committee for affording me this opportunity,” said Strosberg. “I also want to take the time to thank Steve Swanson and everyone at Virginia for their help in preparing me for this.”

“I am looking forward to becoming a member of the Clemson family and am ready and excited to begin working with the team,” he added.

During Strosberg’s tenure at Virginia, which began in February of 2001, he served as the Cavaliers’ recruiting coordinator, bringing in five top-10 recruiting classes during his seven seasons. During this time, the Cavalier team won the program’s first ACC title, finished in the national top 10 five times and advanced to the NCAA Tournament all seven seasons, including a trip to the NCAA Sweet 16 and an eighth-place final national ranking in 2007.

While at Virginia, Strosberg helped lead team and individual training and served as the goalkeepers coach. He performed daily administrative operations and managed team travel and the team’s operating budget. He was also the co-director of Soccer Centers of Excellence camps.

Prior to working as an assistant at Virginia, Strosberg was a women’s assistant coach at his alma mater, Cortland College, in Cortland, NY from August 1998 to December 1999. Cortland finished in the top 24 nationally in NCAA Division III both seasons. At Cortland, Strosberg worked with the goalkeepers and field players and assisted with daily administrative tasks and recruiting operations.

Strosberg played professionally for the USISL’s New York Capital District Alleycats in Albany, NY from 1993-1996. He represented the United States at the U.S. Maccabiah Games in Israel in 1997 and was an alternate on the team in 1993. Strosberg was named a Regional All-American at Cortland College, where he played in 1995 and 1996.

Strosberg and his wife, Jessica (Wilk), were married in December of 2007.