The first African-American inducted into the Clemson Hall of Fame never scored a point in any sport and never coached a team in Tigertown.

Clemson’s first African-American Hall of Famer began his career as a kid picking up rocks on the Tiger baseball diamond as well as football practice and game fields.

After helping with the fields from the time he was a youth, because his stepfather was in charge of the athletic grounds, Herman McGee was hired by Jess Neely in a full-time position as an assistant athletic trainer during the late summer of 1934, just before his 16th birthday.

It was the beginning of a 46-year career in Tiger athletics, still the longest tenure of any Clemson athletic department employee in a full-time capacity in history.

I first met McGee when I came to Clemson in September 1978. Knowing the challenges that African-Americans faced during the first half of the 20th century, I was surprised to learn of his long tenure. But the more I got to know him, I understood how it happened.

In late June 1979, I was working on the Clemson football media guide, my first of 40 in my career and Danny Ford’s first year as head coach. It was an early evening, but a nice night, so I decided to take a break from typing biographies on my electric typewriter and head down to the baseball diamond to watch Bill Wilhelm run his youth baseball camp for a few minutes.

Al Adams, my predecessor as assistant sports information director under Bob Bradley, always told me, “If you have a chance to spend some time talking to Herman McGee, do it!”

I went to the first-base dugout, and there he was treating a young boy who had a cut on his elbow. I sat down and watched McGee work his craft with some bandages and a smile that comforted the child.

We started a conversation, of course about Wilhelm. He had been working at Clemson for 24 years before Wilhelm’s first year in 1958. That year, McGee experienced Clemson’s first trip to the College World Series.

Those were times when there were considerable challenges in traveling with an African-American, regardless of his capacity. Sometimes, Wilhelm solved the problem by letting McGee room with him. Other times, McGee had to stay in the hotel that was in a different part of town, one that housed African-Americans.

According to legend, at the 1948 Gator Bowl, Clemson players smuggled him into the team hotel and he stayed in a player’s room. On another occasion, he stayed on a couch in what was used as a team hospitality room.

At times, it was more challenging, even when he traveled with the football team, especially to the state of North Carolina.

“I remember in the early 1960s, we went to Wake Forest,” said Whitey Jordan, who was a student-athlete on the football and baseball teams from 1954-57 and an assistant coach with the football program from 1959-69.

“When we got off the bus, Herman was met by an African-American family who took him to their home. He couldn’t stay with us in the hotel, so Coach (Frank) Howard arranged (through a Clemson graduate in the area) to find him a place to stay. Then, that family brought him to the game a couple hours before kickoff so he could meet the team in the locker room and start taping ankles.”

Speaking of taping ankles, McGee was very efficient according to Jordan.

“Herman could tape ankles faster than anyone. He could tape more players in 30 minutes than it would take others to do in an hour.” 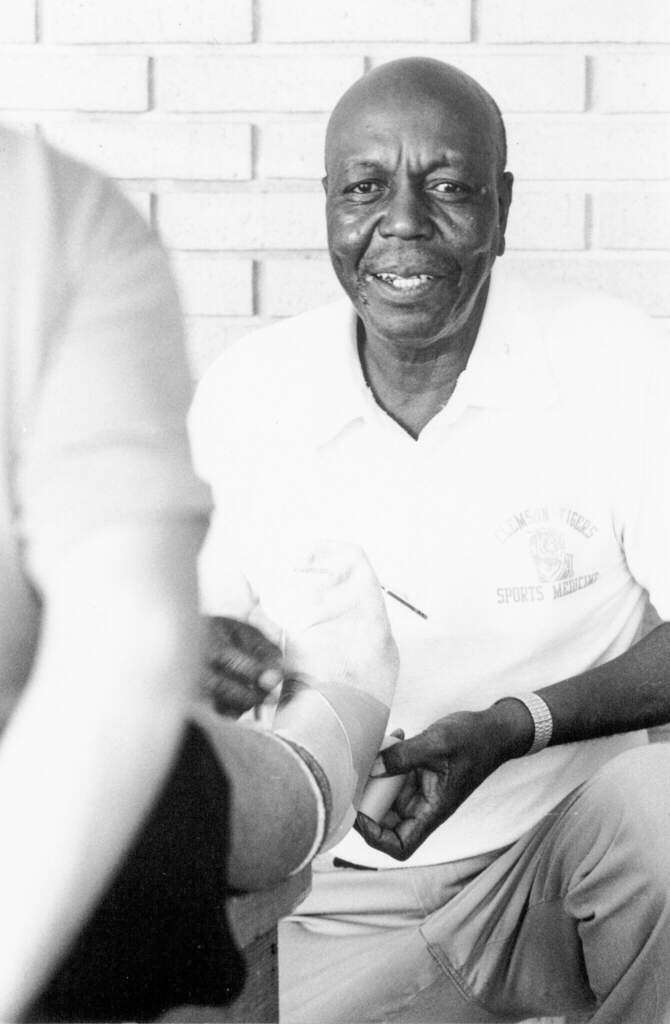 As you can see by his resumé, McGee had a career as an athletic trainer and equipment manager. In 1967, he was a significant player in Clemson’s plot to wear orange shoes in a game against a top-10 NC State team.

That year, the Wolfpack defense, led by future NC State Head Coach Chuck Amato, had worn white shoes, and it had gotten a lot of attention because of the team’s success. The NC State players believed it made them run faster. The 1967 Tiger seniors decided they would counter by wearing all-orange shoes for the first time.

This was the era well before massive Nike contracts. Howard could not contact a distributor and order special orange shoes.

“My wife, Elva, and I went around town and over to Anderson to buy up as much orange paint as we could find,” said Fred Hoover, Clemson’s head athletic trainer from 1958-98.

Hoover brought the paint to McGee, who secretly recruited student managers to paint the shoes at night that week.

“They painted the shoes in the early evening after practice, then let them dry. Herman came back around midnight and stashed the game shoes in a hiding place until Saturday.”

Clemson won that game 14-6 over the top-10 Wolfpack, the highest-ranked team Howard beat in Death Valley in his 30 years as head coach.

Being a historian, even at the age of 23, I was interested in what it was like in the “good old days.” All of McGee’s stories that night in the home dugout were about good people and good Clemson experiences. He could have told some bad ones, but that was not his nature. He always looked on the bright side of a person.

“When I started at Clemson in 1975, I remember coming into the athletic training room in Jervey Athletic Center, and there was Herman singing some little song. We were all dead tired from two-a-day practices, and he was still singing.

“I asked him what he was so happy about, and he said he was just thankful to be alive and working.

“That was Herman McGee. I never saw him in a bad mood. He was a very positive and uplifting person.” 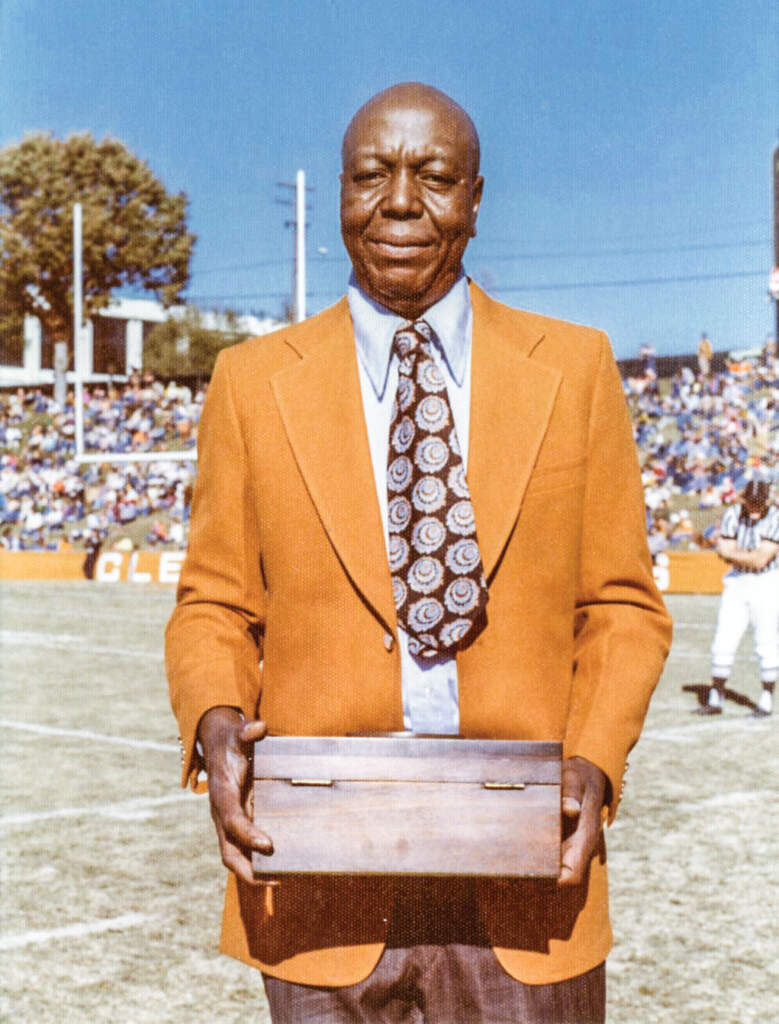 While McGee made a great contribution to the Clemson athletic department through his daily service (he never missed a day of work due to illness in 46 years), his greatest contribution probably came in his ability to give advice during trying times. That was especially the case during the early 1970s, when integration of athletic teams began.

McGee gave countless words of encouragement and sound advice to young men who had just lost a father, never knew a father, broke up with a girlfriend, were homesick and wanted to transfer or who were struggling with studies.

“Herman helped so many student-athletes…there are too many to count,” recalled Jeff Davis, a freshman linebacker in the 1978 season who did not have a father in his life at the time. “He was the person you went to for advice. He had a way of leading you down the right path.”

When I look at the roster of non-coaches on Dabo Swinney’s staff today, I can count four or five who provide the services McGee did by himself for over 40 years. In fact, Davis’ position as assistant athletic director for football player relations is the modern-day version of what McGee did for Tiger athletes 40, 50 and 60 years ago.

Jordan might have said it best at the end of our interview.

“Herman was beloved by coaches, athletes and the administration. It didn’t matter if you were white, black or whatever, everyone loved Herman McGee.”

“He was a first-class person,” stated Hoover. “He did things right, and you only had to ask him once to do something. You could count on him. He was a people person.”

I remember talking to Bradley about McGee when he was still alive.

“When athletes come back to campus, usually the first person they go see is Herman McGee,” said Bradley.

McGee died suddenly on March 8, 1980, about nine months after we visited in that home dugout, and just two months after his mother passed away. The list of Tiger greats in terms of coaches, athletes and administrators who attended the funeral was recordbreaking.

“I was back in Clemson after my rookie season in the NFL, and I remember when I heard Herman had died,” said Bostic. “I wept that night.

“He was taken from us too soon. I was just 22 years old at the time. Today, I appreciate people like Herman more and more, and I wish I had the opportunity to tell him what he meant to all of us before he died.

“He was royalty to me. He was the heart and soul of what Clemson was all about.”