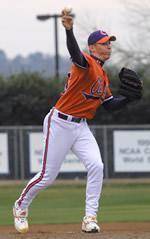 Clemson used a big day by Kris Harvey on the mound and at the plate to defeat #9 North Carolina 9-1 in front of 3,380 fans at Doug Kingsmore Stadium on Saturday. The Tigers, who evened the series, improved to 7-8 overall and 1-1 in the ACC, while the Tar Heels fell to 15-4 and 2-1 in the ACC. It was the Tar Heels’ first loss by more than one run, as their previous three losses were all one-run decisions. The loss also broke North Carolina’s six-game winning streak.

Harvey (3-1) pitched 7.0 innings, yielding only one hit and no runs to earn the win for the Tigers. The junior righthander also struck out five and did not allow a runner past second base. Sophomore righty Daniel Bard (3-2) suffered the loss for North Carolina. It was Bard’s sixth loss of his career, three of which have come against the Tigers.

Harvey was equally as impressive at the plate as he was on the mound, as he hit solo homers in the second and seventh innings. Taylor Harbin also had a big day offensively for Clemson, going 2-for-3 with a home run, his 10th double, and two RBIs.

The Tigers got going offensively early in the game, as Herman Demmink led off the first with a single. Brad Chalk was hit by a pitch, and a Harbin sacrifice bunt moved runners to second and third. Travis Storrer hit a sacrifice fly to shallow centerfield that allowed Demmink to score on a close play at the plate.

Harvey helped his own cause to lead off the second inning when he hit a towering home run to left field. It was the first home run of the season given up by Bard. Clemson missed a chance at another run later in the inning on a controversial call. Stan Widmann was ruled out for leaving third base early after a Demmink pop out to short left field.

Harbin hit a home run in the fifth to up the Tiger lead to 3-0. It was the second baseman’s second homer of the season.

Clemson broke the game open in the sixth. Two North Carolina errors and a walk loaded the bases for the Tigers with no one outs. Adrian Casanova hit a high chopper back to the pitcher that scored Harvey. Demmink then singled through the right side to plate both Widmann and Andy D’Alessio. Clemson was 1-for-16 in the series with runners in scoring position before Demmink’s hit. Demmink joined Harbin and Harvey with two hits and two RBIs on the afternoon. A Harbin double scored Demmink, and consecutive wild pitches allowed Harbin to score, giving the Tigers an 8-0 lead.

Harvey led off an inning with a home run for the second time in the seventh. His fifth homer of the year was a line shot over the wall in center.

Jeff Hahn came on to finish the game for the Tigers on the mound. North Carolina did not score its first run until the ninth on a two-out, run-scoring double by pinch-hitter Bryan Steed. It was the first time the Tar Heels had a runner advance past second base all day.

The Tigers and Tar Heels conclude the three-game series Sunday at 2:00 PM at Doug Kingsmore Stadium.