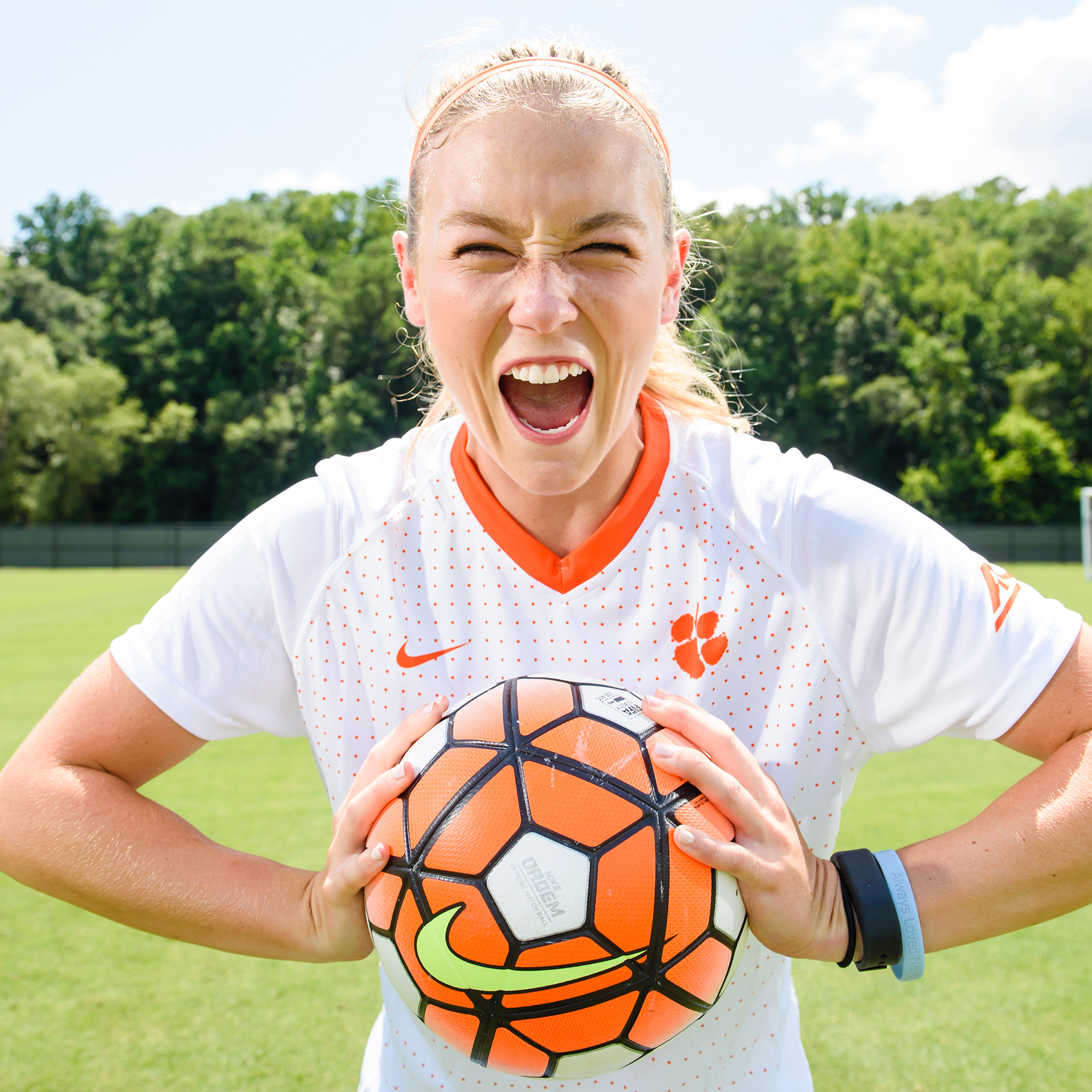 “That hard working, tough New Yorker who always gave everything she had when she stepped onto the field.”

That’s what senior midfielder/forward Shannon Horgan wants to be remembered as after she plays her final match in a Clemson uniform, and her confidence and competitive spirit are helping to foster that legacy.

“My confidence is what makes me the player I want to be every match, and that confidence comes from the work I put in Monday through Friday prepping for Saturday,” she said. “No matter what the situation is, my competitive self will work as hard as I can for Clemson in order to step off the field proud.

“I try my best to focus on what I can control, so that in the end, my performance is solely based on myself and no one else. I love this team and I fight for my teammates, and the name on the front of your jersey is way more important than the back.”

The Long Beach, N.Y., native knew little about Clemson when she started looking at colleges, but she knew that the ACC had a reputation for high-caliber women’s soccer programs. From there, Clemson provided the perfect fit.

“I knew I wanted to play in the ACC from the start because the ACC is the best technical conference for women’s soccer,” she stated. “Three out of my top four schools were in the ACC.

“Being from New York, I did not know much about Clemson before my first visit here. Coach (Eddie) Radwanski was just about to start his first season coaching at Clemson, and he was in the process of turning Clemson women’s soccer around.

“On my unofficial visit, I fell in love with the campus, the people and the passion this town has for Clemson athletics. From the start, Clemson seemed like it would be a great fit for me. With a really talented freshman class coming in and a lot of changes being made, coach Radwanski really trusted that this team was on the brink of making history.

“I wanted to become one of the players who believed in the opportunity at hand and make history through hard work and dedication. I do not regret coming down south at all. It was a very smooth transition moving down here and I have been introduced to endless opportunities during my time at Clemson that I am very grateful for.”

A piece of that history that Horgan had the chance to take part in came in 2016, when the Tigers earned just its second ACC regular-season title and first since 2000. And they did it by winning their last regular-season match…on the road. The victory over Duke is Horgan’s favorite memory from her time as a Tiger so far.

“Not one match in the ACC can be considered ‘an easy win.’ It takes every player on and off the field to win each match, and you need to be willing and able to give it all you’ve got,” she remembered of the match. “We had worked all season to stay in the top of the ACC in hopes of making the ACC Tournament.

“Then, as our last regular-season match rolled around, we found ourselves fighting to place first in the ACC. The Blue Devils had the home-field advantage, and it is tough playing on the road. But we all prepared properly and believed in one another. That match was one of my best played for Clemson and for a lot of other players on the team.

“I remember jogging over to take a corner kick very early in the match thinking to myself that this is an opportunity to score, so just to relax and keep it simple. I curled it to the far post, and once I saw Sam (Staab) head it, I knew it was going in and we all went crazy. That match became a battle until the last second after we went up 1-0. We kept calm and trusted each other as they built up in frustration. That was a match to remember, and we earned that trophy.”

During her time at Clemson, Horgan has also had the opportunity to attend a number of national team camps, including the U-20 National Team training camp after her freshman season and four U-19 National Team events after her sophomore year.

“Each camp taught me a number of different things, ranging from the importance of everything you do outside of soccer to very specific things I can work on in order to become the best player I can be,” she reflected.

“At Clemson, I play an attacking role on the left side, but at national team camps, I am a left defender. It is not a huge transition, but there are role-specific changes that I have to make and remind myself of going into camps. The speed of play is a lot quicker, everyone on the field is a leader and it is important to keep things simple. Your work rate is very important and communication is what will win the match.

“Tracking your progress is also very important, because how can you get better if you are not evaluating yourself on a daily basis? I decided after my freshman season to take advantage of our sports psychologist, Cory (Shaffer). I have been meeting with him almost every week since then. The mental aspect is the most important part of your game, and with his help, I was able to take my game to the next level.

“I have built many great friendships with girls from all over the country, and I’ve gone on trips to New Zealand and Honduras to compete. I look forward to what this season holds, because one goal in mind would be to get called back into another camp.”

Another big goal for Horgan this season is to use her competitiveness and confidence to not only continue her own success on the field, but also help develop younger Tigers so that the team can grow further from the 2016 ACC regular-season championship.

“I am ready to have my best season. One goal is to play a leading role on and off the field for the younger players. I want to help them in any way I can so they can adjust and focus on the soccer as quick as possible.

“I plan on using my confidence and experience to get after players one-on-one, I’m going to take more shots whenever I see the chance and I want to interchange to the right side more often to throw other teams off. Free kicks and set pieces are very important moments in matches as well, and my goal is to relax and take advantage of those precious moments.”

And she is so thankful to the Clemson family for welcoming “that hard working, tough New Yorker,” and fostering an environment where she could thrive both on and off the field.

“I would like to thank my Clemson family for making this journey so enjoyable. The love I have for Clemson is unexplainable, and there really is something in these hills.

“I knew the day I came here for the first time this was the perfect fit, and I never looked back. The love, the loyalty and the dedication from every Clemson student and alumni is indescribable.

“I have learned so much about myself throughout this journey and have overcome a lot of obstacles with the help of Clemson, and I could never repay this place for what it has done for me.”