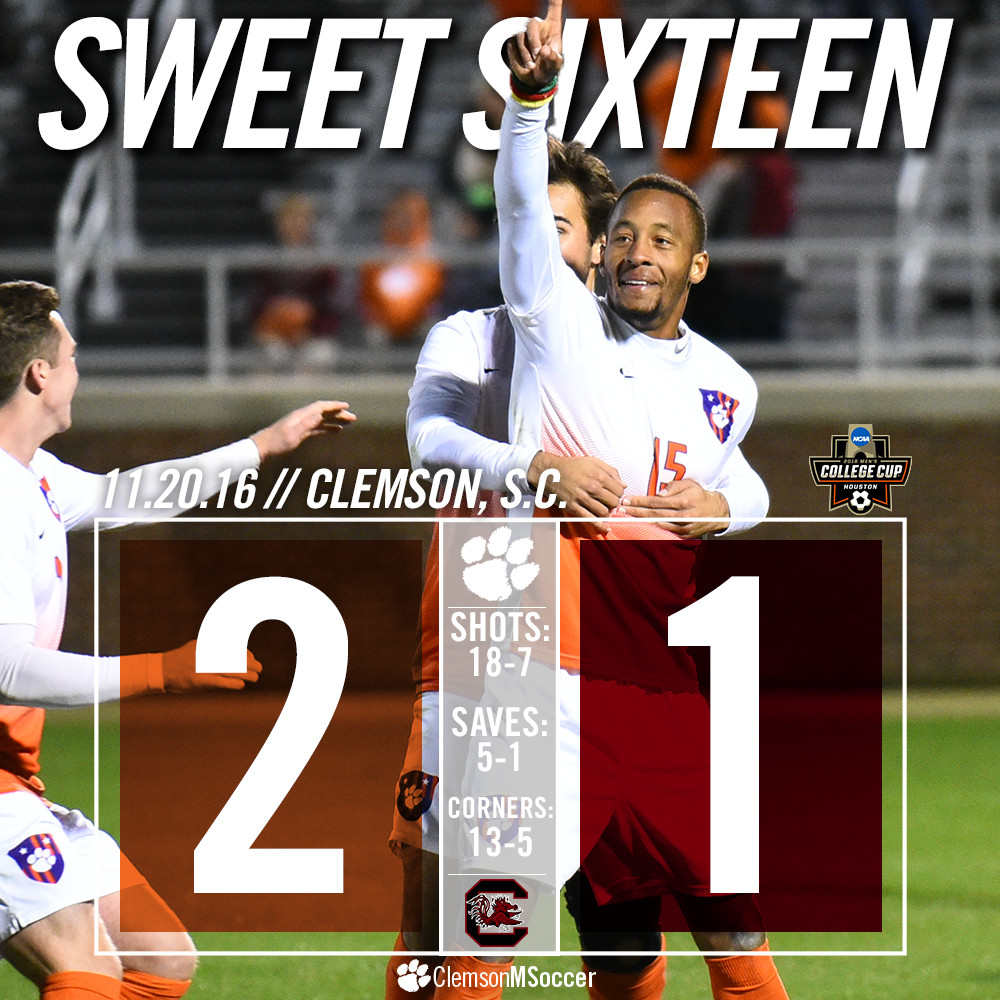 CLEMSON, S.C. – The third-ranked Clemson men’s soccer team advances to the Sweet 16 after defeating in-state rival South Carolina 2-1 in overtime. Clemson improves to (13-3-5) and South Carolina finishes their season (11-8-1) overall. The Tigers now turn their attention to Albany next Sunday, Nov 27 for a Sweet 16 matchup.

In the opening, 20 minutes of play the Gamecocks outshot the Tigers 5-0 and continued to put pressure on the backline of Clemson. In the 21st-minute senior Austen Burnikel was able to head the ball toward the net before it was cleared off the goal line by a Gamecock defender to keep the match scoreless. For the remainder of the half, play would be back and forth, but the two sides would head into the half knotted at zero.

Clemson came out and controlled the possession for the first 25 minutes of the second half but was unable to capitalize on their scoring opportunities. In the 73rd-minute the Gamecocks lofted a ball into the box that was deflected into the net, giving South Carolina a 1-0 lead. In the 85th-minute senior Alex Happi was played a ball from senior Iman Mafi to put him in a position to finish the ball into the back of the net to level the score at one. As time expired senior Aaron Jones placed his free kick just wide and the match would head into overtime.

Just three minutes into the first overtime period, Happi took a ball off his chest just outside the box and delivered the half-volley into the upper ninety to send Clemson to the Sweet 16.

In the match, Clemson outshot South Carolina 18-7, forcing William Pyle of South Carolina into making five saves. Sophomore Ximo Miralles recorded only one save in the match and improves to (11-3-5) on the season.

The Clemson men’s soccer team returns to action next Sunday, Nov. 27 at 6:00 p.m. vs. Albany in the Sweet 16. Albany defeated Boston College earlier today by a score of 3-0.