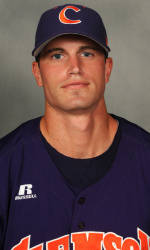 Mike Freeman began Friday in Clemson, received his financial management degree in the morning, flew to the greater Washington, D.C. area in the afternoon, then went 4-for-5 with three RBIs to lead #24 Clemson to an 18-6 victory over Maryland in front of 541 fans at Bob Smith Stadium on Friday night. The Tigers, who took a 1-0 series lead, improved to 29-17 overall and 12-10 in the ACC. The Terrapins fell to 16-35 overall and 4-21 in ACC play. It was the latest meeting on the calendar between the two teams in College Park since 1972.

The Tigers jumped out to a 9-0 lead through five innings then put the game out of reach with seven runs in the seventh. Four Tigers in all made the trek from Tigertown to Maryland after receiving their degrees on Friday. Wilson Boyd, who received his degree in management, went 1-for-2 with two RBIs, and Josh Thrailkill, who also received his management degree, pitched the final 2.0 innings with three strikeouts. Justin Sarratt, who is out for the season due to injury, received his management degree as well.

Tiger starter Casey Harman (6-1) won the battle of Harmans on Friday. In 6.0 innings pitched, he allowed six hits and two runs to earn the victory.

Brett Harman (4-8), no relation to his starting counterpart, suffered the loss after yielding six runs (five earned) on six hits in 4.0 innings pitched.

Will Lamb hit the first pitch of the game off the top of the fence in center for a double. Freeman lined the next pitch off the pitcher for a single to extend his hitting streak to 14 games, tied for the longest by a Tiger in 2010. After the ball went into shallow left field, shortstop Alfredo Rodriguez was unsuccessful in picking up the ball and Lamb scored on the error as Freeman moved to second on the throw to the plate. After John Hinson’s flyout advanced Freeman to third, Freeman scored on a wild pitch.

Brad Miller led off the second inning with a double to left-center and moved to third on John Nester’s flyout. Miller then scored on Boyd’s sacrifice fly to left-center.

In the fourth inning, Kyle Parker led off with a line-drive double to center and advanced to third on Jeff Schaus’ flyout to right field. After Miller walked, Nester laced a double down the left-field line to score Parker. Boyd followed with a grounder up the middle for a single to score Miller. After Boyd advanced to second on a wild pitch, Nester scored on a groundout to second by Richie Shaffer to give Clemson a 6-0 lead.

Clemson added to its lead in the fifth inning. Freeman led off with a single up the middle and went to third two batters later on Parker’s double down the left-field line on a 1-2 pitch. Freeman scored on a wild pitch, then Schaus blasted a two-run homer off the top of the fence down the right-field line, his ninth long ball of the season.

The Terrapins dented the scoreboard in the sixth inning. Matthew Murakami led off with a single up the middle and Gary Schneider followed with a double to left-center. Both runners scored on Matt Marquis’ single up the middle, then Brandon Padula walked on four pitches. David Poutier’s single up the middle loaded the bases with no outs, but Clemson escaped further damage when Harman retired the next three batters without allowing a run.

The Tigers came right back and scored seven runs, all with two outs, in the top of the seventh inning. Freeman led off with a single to right field and went to third on Hinson’s single to right. After Parker walked to load the bases, Freeman was erased at home on Addison Johnson’s fielder’s choice. After Chris Epps followed with an infield single and Shaffer walked to load the bases. Lamb laced a double to left field to score Pohl and Epps, then Freeman grounded a single up the middle to score Shaffer and Lamb.

In the bottom of the seventh inning, Rodriguez led off with a single to right and Murakami followed with a bad-hop single through the left side. Schneider belted a single to left-center to score Rodriguez, then Murakami scored and Schneider advanced to third on a throwing error by Epps. Marquis’ groundout scored Schneider.

After a 26-minute delay due to a three light banks going dark, Jon Wilson led off the eighth inning with a double to right field and stole third base. Two batters later, Wilson scored on Rodriguez’s groundout.

Pinch-hitter Spencer Kieboom led off the ninth inning with an infield single and advanced to third on Lamb’s single through the right side. Freeman’s sacrifice fly to deep left field plated Kieboom. Two batters later, Parker blooped a two-out single to left field to score Lamb.

Clemson outhit the Terrapins 18-12 and totaled seven doubles, including two two-baggers apiece by Lamb and Parker, along with Schaus’ home run. Lamb went 3-for-6 with two RBIs and three runs, while Parker went 3-for-4 with an RBI, three runs, and two walks. Freeman tied his career-high with four hits as well.

Clemson and Maryland will play game-two of the series on Saturday at 1:00 PM.