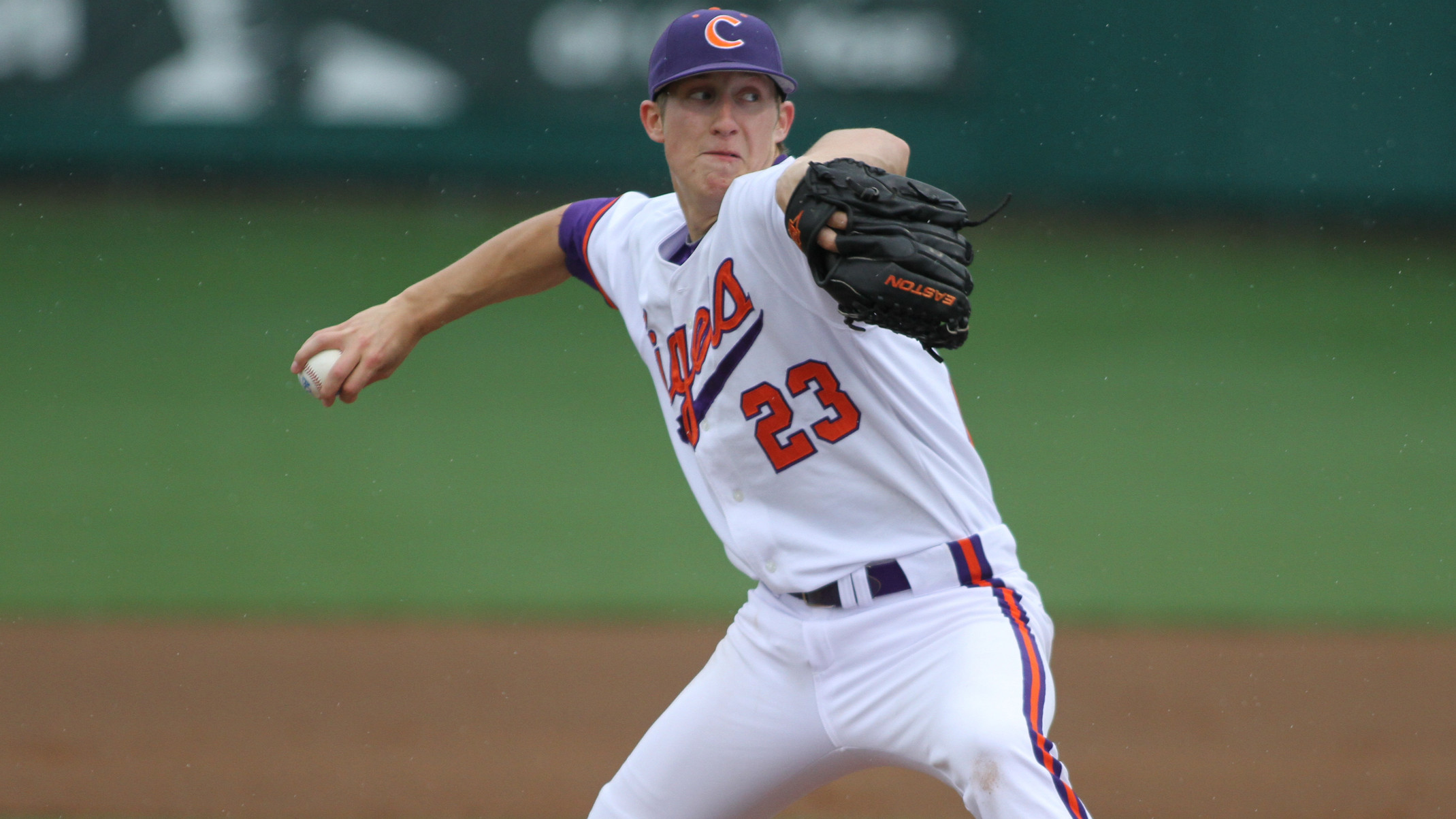 Sophomore righthander Daniel Gossett struck out a season-high 12 batters to lead #15 Clemson to a 7-1 victory over Georgia Southern at Doug Kingsmore Stadium on Friday night.  The Tigers, who took a 1-0 lead in the series, improved to 35-15 on the season.  The Eagles dropped to 25-24 in 2013.

The Tigers scored a run in the first inning and never relinquished the lead.  Clemson added three runs in the fourth inning, one run in the fifth, and two runs in the seventh to close out the scoring.

Gossett (8-3) pitched 7.1 strong innings to earn the win.  He allowed just two hits, one run, and two walks with 12 strikeouts.  He also retired the first 10 batters of the game.

The Tigers scored in the first inning when Garrett Boulware grounded a two-out single through the left side to score Maleeke Gibson, who earlier led off with a walk and stole second.

In the fourth inning, Shane Kennedy drew a one-out walk and advanced to third on Jon McGibbon‘s single through the left side on a hit-and-run.  Tyler Krieger reached on a fielder’s choice to first as McGibbon was retired at second and Kennedy scored.  After Thomas Brittle walked, Mike Triller blooped a two-out double to left field to score Krieger and Brittle, giving Clemson a 4-0 lead.

Steve Wilkerson led off the fifth inning with a walk, stole second, and advanced to third on an error.  Two batters later, Boulware was intentionally walked and Kennedy walked to load the bases.  McGibbon then grounded out to first to score Wilkerson.

In the sixth inning, Scooter Williams was hit-by-pitch, stole second, and scored on Ben Morgan’s single up the middle.

Wilkerson led off the seventh inning with a walk and advanced to second on Steven Duggar‘s sacrifice bunt.  Boulware followed with a line-drive single to left field to score Wilkerson, then Kennedy belted a triple to left-center to score Boulware.

Boulware and Triller both went 2-for-3 with two RBIs to lead Clemson, who outhit Georgia Southern 9-3.  Kennedy went 2-for-2 with a triple and two walks as well.

Morgan went 2-for-4 with the Eagles’ only RBI.

Clemson and Georgia Southern will play game-two of the three-game series on Saturday at 6:30 PM.