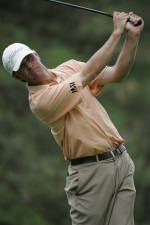 Glover Records Another Top Five at a Major

Clemson, SC – Former Clemson All-American Lucas Glover finished fifth at the 2009 PGA at Hazeltine Golf Club in Chaska, MN on August 16. It was his second top five finish at a major championship this year. He won the United States Open at Bethpage Black in June.

Glover finished with a two under par score of 286 for his 72 holes. He had rounds of 71-70-71-74 for the four days on the par 72 course that is over 7600 yards in length. His fifth-place finish was the third best ever by a former Tiger at a Major championship, the best for a former Tiger at the PGA.

It was Glover’s second top 10 in a tournament at Hazeltine. In 1999, as a Clemson sophomore, Glover shot a 295 to finish eighth at the NCAA Tournament. He was Clemson’s top golfer at the 1999 NCAAs and it was his best finish at an NCAA national tournament in his career.

Glover’s performance at the PGA moved him into 11th place on the 2009 United States President’s Cup List, just one spot out of the top 10, which would have given him an automatic spot on the team. Glover must now wait until September 8 to see if he is one of two at-large selections to Fred Couples team. He was taken as an at-large player in 2007 for the President’s Cup team. Couples said on Sunday that Glover, Hunter Mahan and Brian Gay are the leading candidates for the two spots.

Glover did improve his World Ranking to number-15 with his performance at the PGA. It is the highest world ranking in history for a former Clemson golfer.

Glover won $300,000 at the 2009 PGA and now has $3,403,481 for the year, the most money ever earned by a former Clemson golfer on the PGA Tour. Glover enters this weekend’s PGA event in Greensboro ranked seventh on the money list and fifth on the FedX Cup points list with 1698.

In terms of PGA Tour stats, Glover is the number-one rated player on tour in all-around driving, stands second in total birdies (306), fifth in birdies per round (4.08) and sixth in round three scoring average.

Glover will be one of five former Tigers playing in Greensboro this weekend at Sedgefield Golf Club at the Wyndham Championship. He will be joined by Kyle Stanley, Charles Warren, D.J. Trahan, and Jonathan Byrd.