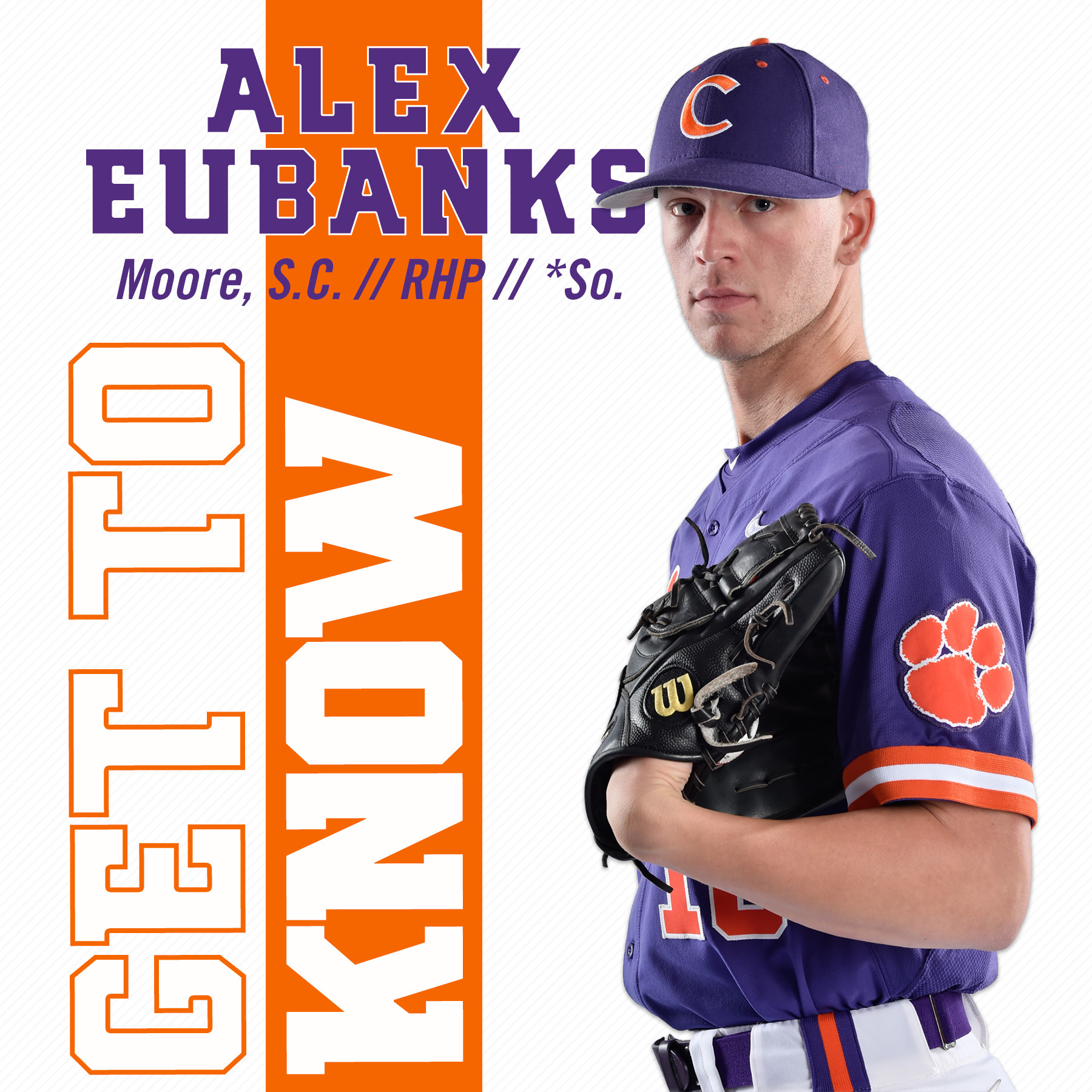 Get To Know Alex Eubanks

And it’s the reason he’s a pitcher.

“I played both ways, pitching and in the infield, all the way up until college,” he said. “I probably could’ve gone to a small school and played both ways, but I always wanted to be on the mound. I always wanted the ball in my hand. I wanted everything to be on me. I always gravitated towards that and enjoyed that more, so when I had the chance to pitch here, that was a no-brainer for me.

“I enjoy pressure. I feel like that’s an attribute of my game that I always try to embrace.”

So when head coach Monte Lee gave Eubanks the ball for the rubber match against South Carolina last season, it was excitement for the significance of the game that overcame the nerves of it being his first career start.

“You dream about those games, especially growing up around here, being a Clemson fan all my life and coming to those South Carolina games,” the righthander reflected. “I’ve always dreamed about playing in those, and having that to be my first career start and being able to win the series on Sunday…words can’t describe how much fun that was.”

But it had been a long road for him to get to that point, as a gruesome knee injury almost ended his Clemson baseball career before it even started. Following freshman orientation, Eubanks was driving his moped when a car t-boned him, hitting his knee straight on.

“I could completely see my kneecap, and when I was laying there, I honestly thought I was done playing baseball,” he admitted. “I had surgery and had 27 staples across my knee.

“It was tough at first, battling through that and not being able to play. It put everything in a different perspective for me, because everything can get taken away so quickly. Something like that makes you work so much harder and appreciate everything so much more.

“That experience made me so much stronger both physically and mentally. I push myself so much more. It made me tougher overall.”

One redshirt season to heal later, and Eubanks’ 7.2 innings pitched of one-run ball against the Gamecocks last year helped him to establish himself as one of the Tigers’ most reliable pitchers. It was perhaps no surprise that Lee turned to Eubanks for a must-win game against Western Carolina in the regional. The righthander thrived under the pressure yet again, turning in his first career complete game and delivering the win.

“You live for those games,” #16 expressed. “That’s what you want to pitch in. When our backs are against the wall, that’s when we need to play our best, and I feel like everybody did that, and it was really special. It was fun.”

Heading into this season, Eubanks is looking forward to building on the Tigers’ success from last year, and he believes the determination and talent this year’s team has should get fans excited for the upcoming season.

“I think it’s the excitement and the way that they know that we’re going to be out there giving it everything we have. We’re going to have a really good team this year, and we’re all excited about it, and we think they should be excited about it, too. We would love for them to continue to come out and support us, be here with us and experience all of this with us.”

And he is not taking a moment of that experience for granted.

“I want people to know that I have a lot of pride in being here,” stated Eubanks. “I’m very thankful for every opportunity I’ve been given to come here, to play here and be with these guys. I’m someone who works hard and appreciates everything we get here. I’m someone who cares about the game and my teammates…and wants to win.”