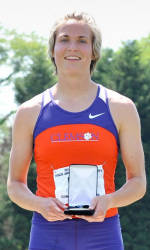 As members of the All-District First Team, Mamona and Weber are now eligible for Academic All-America honors, which will be announced June 24 after a national ballot vote by members of CoSIDA.

This is Weber’s second selection to the CoSIDA Academic All-District Team. She was a second-team honoree a year ago. Weber sports a 3.78 cumulative GPA in health science, and was an indoor All-American in March after a fifth-place finish in the pentathlon. Weber also claimed ACC individual championships and conference records in both the pentathlon and heptathlon this season. She is scheduled to compete at the NCAA Outdoor Championships next week in the heptathlon.

Mamona will also compete at next week’s NCAA Championships. She enters the meet as the nation’s No. 2 seed in the triple jump. She put together a personal best 45’6.5″ leap last weekend at the NCAA East Preliminary Round in Greensboro, NC. She was the NCAA’s indoor runner-up in the triple jump in March. Mamona, who has a 3.47 GPA in health science, is a three-time All-ACC Academic Team selection as well.

Buchholz and Ruck received second-team honors, both of which were the first-ever CoSIDA honors for the two student-athletes. Ruck was an indoor All-American after a seventh-place showing in the 5K, the same event in which she won an ACC indoor championship. Ruck was also all-conference in both the 5K and 10K. She will compete next Wednesday at the NCAA outdoor nationals in the 10K. Ruck boasts a 3.78 GPA in health science.

Buchholz is a three-time All-ACC Academic Team selection, and three-time all-conference performer in the javelin throw as well. She concluded her career last weekend at the NCAA East Prelims in Greensboro, and ranks No. 3 all-time on Clemson’s javelin performance list. Buchholz sports a 3.88 lifetime GPA as a marketing major.