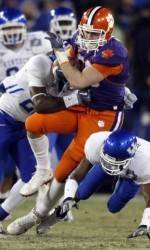 The parade of former Tigers who were drafted began on Thursday night when unanimous All-America running back Ricky Sapp, Crezdon Butler and Kavell Conner were all selected in rounds four thru seven.

Since the draft, four Tigers have signed free agent contracts. All-ACC tight end Michael Palmer signed with the Atlanta Falcons, All-America guard Thomas Austin signed with the Minnesota Vikings, cornerback Chris Chancellor with the Cleveland Browns and defensive end Kevin Alexander with the Denver Broncos. Senior Rendrick Taylor was expected to sign a free agent contract, but it was not known as of this writing.

Clemson has had 44 players over the years who have gone on to play in the NFL after signing a free agent contract, including 2008 receiver Tyler Grisham, who played in the NFL for the Pittsburgh Steelers last year. Jeff Bostic, the only former Clemson player to win three Super Bowl Championship rings, was a free agent after his career as a Clemson center.

Clemson had 18 players on NFL rosters last year, including Anthony Waters who was a member of the Super Bowl Champion New Orleans Saints. Sixteen of the 18 players participated in an NFL game last year.

Since the end of last season, Tye Hill was traded to the Tennessee Titans and Charlie Whitehurst signed a free agent contract with the Seattle Seahawks.