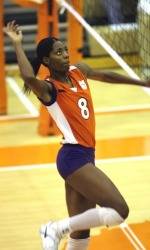 The four selections are the most by Clemson in a single season, as just four other players, including Hepburn, have earned All-America honors. Hepburn added another award to her impressive career as the program’s first two-time selection. The junior from Miami, FL is the school record-holder for hitting percentage in both a single season (.395) and over a career (.342).

In 2007, Hepburn led the team with 440 kills and 166 total blocks. She ranked first in the ACC and 13th nationally with a .395 hitting percentage and was listed in the top 30 in the nation for blocks per game as well.

Ege, a libero from Istanbul, Turkey, set a school record with a 5.39 digs per game average in 2007, and the sophomore’s 615 defensive saves ranked second all-time.

Setter Murphy (New Lenox, IL) also entered the Clemson annuals in just her sophomore season. She tallied 1432 set assists, a mark that ranked fifth in Tiger history, while guiding the team to a .272 hitting figure, which was the second highest all-time.

Steiner, a senior from Crystal Lake, IL, totaled 308 kills in 2007 for a .381 hitting percentage that ranked third for a single season. She also posted 126 total blocks on the year.

All four players were announced as first-team all-region selections last week, while Ege, Hepburn and Murphy were named to the 2007 All-ACC First Team.