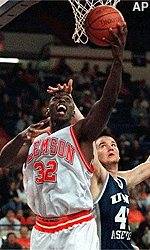 CLEMSON, S.C. — Former Clemson players Dale Davis, Elden Campbell, Harold Jamison and Horace Grant all will be participating in the 2000 NBA Playoffs, which begin Saturday. Davis, Campbell and Grant are starters for their respective teams, while Jamison is a reserve. All games will be shown on NBC or TNT this weekend as eight playoff series begin.

Davis, a forward for the Indiana Pacers, will be playing against the Milwaukee Bucks in the first round. Elden Campbell and the Charlotte Hornets will meet the Philadelphia 76ers. Horace Grant and the Seattle Supersonics will meet the Utah Jazz in the first round, while Harold Jamison and the Miami Heat will face the Detroit Pistons in the opening round.

Davis nearly averaged a double-double for season, scoring 10.0 per game and pulling in 9.9 rebounds per contest. The 1991 Clemson graduate shot 50.2 percent from the field, 13th best in he league. His rebound average was eighth best. He also shot a career best 68.5 percent from the foul line.

Campbell was the top scorer among Clemson’s seven former players in the NBA with a 12.7 average for the Hornets. He also averaged 7.6 rebounds per game and shot 69 percent from the foul line. He had a season high 27 points against the Washington Wizzard on Feb. 5 and had a season high 20 rebounds against the Bulls on March 15. Campbell averaged 1.92 blocked shots per game, 11th best in the NBA.

Grant, who just finished his 13th regular season, started 76 games for the Supersonics this year and averaged 8.1 points and 7.8 rebounds per game. He shot 72 percent from the foul line and 44 percent from the field. Grant had a season high 26 points against Denver on April 4th. Grant played on three NBA World Championship teams with the Bulls from 1991-93, the only former Tiger to win an NBA World Championship ring.

Jamison is in his first year in the NBA with the Miami Heat. A senior on Clemson’s NIT finalist of 1999, he played in 12 games this year and averaged 1.5 points and 1.8 rebounds. He had his best game against the Atlanta Hawks on March 21 when he had six points and eight rebounds, including seven off the offensive boards.

Three other former Tigers have concluded their seasons. Chris Whitney started 15 of his 82 games with the Washington Wizzard and averaged a career best 7.8 points per contest. He came on strong at the end of the season, averaging 15.1 points and 7.1 assists per game over the last 15 games. He had 17 points and a career high 14 assists against Milwaukee on April 15th and had a season high 29 points against the Dallas Mavericks on March 25th.

Like Whitney a former Tiger who grew up in Hopkinsville, KY, Greg Buckner averaged 5.7 points and 3.6 rebounds a game for the Dallas Mavericks in 1999-00. Like Whitney, Buckner finished strong with a 9-point average over his last 10 games. Buckner played in 48 games and averaged 19.2 minutes a contest. He shot 48 percent from the field and 68 percent from the foul line. He scored a season high 25 points against the Boston Celtics on March 18th.

Davis Gray was a seventh former Tiger in the league this year, the highest number of former Tigers in the NBA in any one year in history. Gray played 21 games, including two starts, and averaged 2.3 points and 1.2 rebounds.