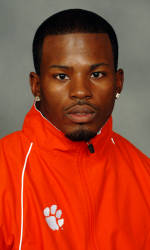 Clemson might have the fastest collection of sprinters in the world in 2009. Earlier Saturday, junior Jacoby Ford won the Orange & Purple Classic with a time of 10.11, which is the fastest time in the NCAA so far this season. However, he was not the fastest sprinter with Clemson ties to run the 100m dash this weekend. Former Tiger great Travis Padgett ran 10 seconds flat on Friday to win the Super Grand Prix in Doha, Qatar.

Padgett ran a solid 10.04 in the preliminary round, then followed by matching the world-best time with a 10.00 in the final. He held off the likes of Nesta Carter and Michael Frater, both members of the gold-medal Jamaican 4x100m relay team from 2008.

Last month, Padgett teamed with former Clemson star Shawn Crawford (1997-2000) to run the middle legs for Team USA’s record-breaking 4x100m group at the Penn Relays. Padgett competed at Clemson from 2006-08 and earned six NCAA All-America honors, including a national championship in the 60m dash in 2007. He was a 2008 Olympian for Team USA in the 4x100m relay.