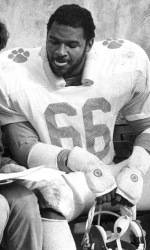 CLEMSON, SC – Former Clemson All-ACC defensive tackle Steve Durham passed away on Friday, April 30 due to kidney failure. Durham was 51-years-old at the time of his death.

Durham had been wheelchair bound for many months after a tumor on his C5 Vertebrae had been removed. He lost use of his legs and 75 percent of the movement in his arms and hands. In 1996 he had a cancerous tumor removed from his colon, and in 2002 he had another tumor removed from the C5 vertebrae.

A group of former teammates from Byrnes High School and Clemson had raised money to make his home wheelchair accessible and to purchase a special van.

Durham was a four-year letterman at Clemson between 1977-80. After earning a letter as a reserve tight end in 1977, Durham lettered as a reserve defensive tackle on the 1978 ACC Championship Clemson team that finished the season ranked sixth in the nation with an 11-1 record. He had 24 tackles, including seven tackles for loss that year.

In 1979, as a junior, Durham played in the shadows of first-team All-American Jim Stuckey, but he still earned first-team All-ACC honors at tackle. He finished the year with 96 tackles, including 16 tackles for loss and 10 sacks. He had eight tackles in the victory over Notre Dame in South Bend, including a key fourth quarter sack of Irish quarterback Rusty Lisch in Clemson’s 16-10 victory.

The 1979 Clemson team finished third in the nation in scoring defense, seventh in total defense and 10th in rushing defense.

As a senior in 1980 he had 73 tackles, including seven tackles for loss and five sacks. He had eight tackles in the victory over South Carolina in his final game as a Tiger.

Durham, who returned to Clemson to earn his undergraduate degree in 1986, was drafted in the sixth round by the Seattle Seahawks in the spring of 1981 and played one season (1982) with the Seahawks.

Funeral services will be Tuesday, May 4, 2010, at 2:00 PM at Mayfield Chapel Baptist Church in Woodruff, SC. Burial will be at the Church cemetery, and Sullivan Brothers Mortuary is handling the arrangements.