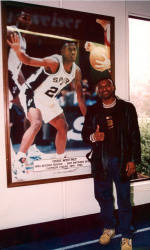 CLEMSON, SC – Chris Whitney was named the director of player development for the Charlotte Bobcats, the team announced late last week. Whitney, who played at Clemson from 1991-93, will provide guidance to Bobcats players by helping them develop life skills, both professionally and socially, while assisting in planning for life after basketball.

After his playing career at Clemson, Whitney was selected in the second round (No. 47 overall) of the 1993 NBA Draft by the San Antonio Spurs. He played 11 seasons in the NBA for four different teams and averaged 6.5 points per game. He played eight seasons with the Washington Wizards (formerly Bullets), where he remains the team’s all-time leader in free throw percentage (.885) and third in three-point goals (481).

While playing for the Wizards, Whitney created the C-WHIT (Children with Hope in Tomorrow) Foundation to assist programs dedicated to helping children in Washington, D.C. and his hometown of Hopkinsville, KY. He was runner-up for the NBA’s Sportsmanship Award in 2000-01.