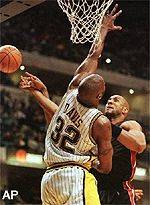 CLEMSON, S.C.–Former Clemson All-American and current Indiana Pacers forward Dale Davis was selected for the Eastern Conference team in the 2000 NBA All-Star Game on Tuesday. The contest will be played on Sunday, February 13th in Oakland, CA. Davis is one of seven first-time selections for the All-Star Game. The contest will tipoff at 6:00 PM and will be televised by NBC.

Davis, a native of Toccoa, GA, is having a career year in many areas for the Pacers and Head Coach Larry Bird. He is currently fifth in the NBA in field goal percentage (.516), and eighth in rebounding (10.0). He is also averaging 11.4 points per game, his high average since he averaged 11.7 points a game in 1993-94. Davis is also shooting a career best .701 from the foul line, far above his career .524 figure. He is has started all 43 games for the Pacers and has now started 124 of the last 339 Pacer games.

For his career, the nine-year veteran is the all-time leading field goal percentage leader (.546) and rebounder (5484) in the history of the Indiana Pacers franchise. Davis, who earned his degree from Clemson in management in 1991, was a three-time All-ACC player for the Tigers between 198791. He was an honorable mention All-American in 1989-90 when he combined with Elden Campbell to lead Clemson to its first and still only ACC regular season championship. He averaged 15.3 points and 11.3 rebounds a game on Clemson’s NCAA Sweet 16 team that ranked in the final top 20 of all three polls and finished with a 24-8 record. He was a first-round draft choice of the Pacers, the 13th pick of the entire draft, in June, 1991.

Davis was inducted into the Clemson athletic Hall of Fame in 1996. He is still second in Clemson history in career rebounds with 1216, ranks sixth in scoring (1650) and is third in field goal percentage (.588).