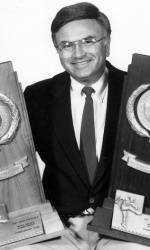 Dr. I.M. Ibrahim, the Father of Clemson soccer and the only Clemson coach in any sport to win two national championships, died suddenly Saturday afternoon in Seneca, SC. The 67-year-old coached the Clemson men’s soccer program from its inception in 1967 until his retirement after he 1994 season.

Ibrahim collapsed Saturday afternoon while playing golf at Cross Creek Country Club in Seneca, SC, where he was a long time member and regular weekend golfer. He was pronounced dead at 4:45 PM at Oconee Memorial Hospital in Seneca, SC from a sudden cardiac arrest according to the Oconee County Coroner’s office. Since his retirement from coaching he developed a successful business career that included his ownership of the Tiger Sports Shop in Clemson.

Born in Haifa, Israel, he entered the United States in 1960 and attended Shorter College in Rome, GA. In his last two years at Shorter, he played and served as the coach of the soccer program. Upon his graduation from Shorter in 1964, he moved to Clemson where he earned his M.S. and Ph.D in chemistry.

In 1967 he approached then Assistant Athletic Director Bill McLellan about forming a varsity soccer program. McLellan thought the idea was sound and asked Athletic Director Frank Howard to start the program with Ibrahim as head coach. “Coach Ibrahim was a true American success story in every sense of the word,” said McLellan on Saturday evening. “This is a man who came from another country and achieved success at the highest levels both as a soccer coach and as a businessman.

“Coach Ibrahim started the soccer program from scratch and led it to national prominence very quickly. The two National Championships and the numerous ACC Championships are a legacy that will never be forgotten.

“I was proud to have know him as a person, a coach and a friend.” Ibrham had Clemson in the national top 20 by his sixth year and the Tigers won the ACC championship in 1972 with a 13-1-1 record. By 1975, just the ninth year in the program’s history, he had Clemson ranked on top of the national polls. He would bring Clemson to a number-one national ranking at some point in nine different seasons in his Clemson career.

Between 1972 and 1979, Clemson won eight consecutive ACC Championships, the longest run of ACC titles in any sport in Clemson history. During that time Clemson did not lose a single league match and posted a 38-0-2 record.

Ibrahim finished his career with an overall record of a 388-102-31 for his 28 years and his .774 winning percentage is the second best in Clemson history in any sport among coaches who have served at least four years since the program joined the ACC in 1953. He had a 32-16 record in NCAA Tournament competition and the .667 winning percentage is among the top 10 winning percentages in NCAA soccer history.

His 388 wins rank second in ACC men’s soccer history and his .774 winning percentage is also second. He took Clemson to a final top 20 national ranking 19 seasons, a record that stood among all Clemson coaches until this past spring when Larry Penley took the Clemson golf program to a 20th top 20 finish at the NCAA tournament.

Ibrahim was a master recruiter who coached nine Clemson soccer players who were named to the ACC’s 50-year Anniversary men’s soccer team in 2002. Eleven times one of his players was named ACC Player of the Year and he coached 16 different players who earned All-America honors by the National Soccer Coaches Association.

While he had many outstanding seasons, his two national championship campaigns stand out. His 1984 team posted a 22-4 record, but it had a difficult path to win the title. Along the way Clemson had to defeat the top four seeds in the tournament, including a victory over two-time defending champion and number-one ranked Indiana in the championship match. Clemson downed the Hoosiers 2-1 in the Kingdome in Seattle in a match televised nationally on ESPN. It marked the first time in any NCAA Tournament that a team had beaten the top four seeds in the field to win the championship.

In 1987, the Tigers were seeded 23rd, but made a miraculous run with victories on the road against 14th ranked Evansville, top ranked Indiana and sixth ranked Rutgers to reach the Final Four. Clemson was rewarded by playing host to the Final Four that year and the Tigers won the semifinals over eighth-ranked North Carolina and the championship over 20th ranked San Diego State. Clemson defeated San Diego State by a 2-0 score at Riggs Field, the only time Clemson has won a national championship in any sport on its campus.