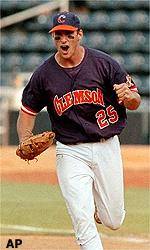 Clemson, S.C.-Jason Harris and Bradley LeCroy, both former Clemson baseball players, have landed assistant coaching positions at two area schools. Harris will be an assistant coach at Lander University, while LeCroy will join the staff at Anderson College.

“Jason will be an outstanding addition to our coaching staff,” said Lander coach Rusty Stroupe, who coached Harris for two years at Brevard Junior College. “I know he understands my philosophy and believes in it. He was an extremely intense competitor on the field, but was also a gentleman on and off the field.”

LeCroy will be Anderson’s new infield and hitting instructor. LeCroy will work for head coach Joe Miller at Anderson College.

LeCroy played four years (1997-2000) for the Tigers at various positions. The native of Walhalla, S.C. saw action at second base, shortstop, right field and designated hitter during his career. He played in 171 games for Clemson and made a trip to the College World Series with the Tigers this past season.

“We’re excited to have someone with Bradley’s experience on our staff,” Miller said. “It’s great to have someone who played on a College World Series team at the Division I level on our staff. Bradley wants to get into coaching, and I’m happy to give him his start. He is going to help us a lot.”