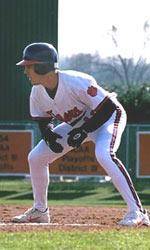 Lefthander Daniel Davidson pitched 7.0 shutout innings in leading #2 Florida State to an 8-1 victory over #13 Clemson Sunday in front of 3,107 fans at Dick Howser Stadium. Florida State won the final two games of the series after Clemson won the series opener Friday 8-4. Florida State improved to 33-6 overall, 11-4 in the ACC, while Clemson fell to 25-9, 4-5 in the ACC.

Davidson (6-0) tied his career high with seven strikeouts and did not allow a walk while allowing only four hits. He only faced two batters over the minimum. Starter Steven Jackson (4-2) suffered the loss for the Tigers.

Florida State got on the board in the first inning on a balk call by home plate umpire Gerald Trexler while Stephen Drew was on third base with two outs. Drew, the leadoff batter, reached on a fielder error.

The Seminoles added two more runs in the second inning. After Clemson turned a double play, Chris Hart lined a full-count single to left field to plate Jerrod Brown. Matt Sauls then lined a double off the right-field fence to plate Hart.

Brown slapped his second hit of the game with two outs in the third inning to plate Drew, who had singled to leadoff the inning. After the bases were loaded, pinch-hitter Bryan Zech blooped an RBI, infield single to shortstop Russell Triplett, who then mishandled the ball and allowed another run to score, giving the Seminoles a 6-0 lead. Zech entered the game 7-for-49 (.143) on the season.

Florida State scored for the fourth-straight inning in the fourth. Matt Sauls led off with a walk, stole second, and scored on Eddy Martinez-Esteve’s single up the middle.

The scoring continued for the Seminoles in the sixth inning. Hart led off with a pop-fly double that Tiger infielders lost in the sun. Then Sauls followed with a solid single to right-center to plate Hart.

The Tigers finally got on the board in the eighth inning. David Slevin doubled off the glove of the right fielder. Slevin, a Port Saint Lucie, FL native, had three of the Tigers’ six hits in the game. After pinch-hitter Collin Mahoney reached on a throwing error by Martinez-Esteve, pinch-hitter Garrick Evans grounded out to the pitcher, plating Slevin.