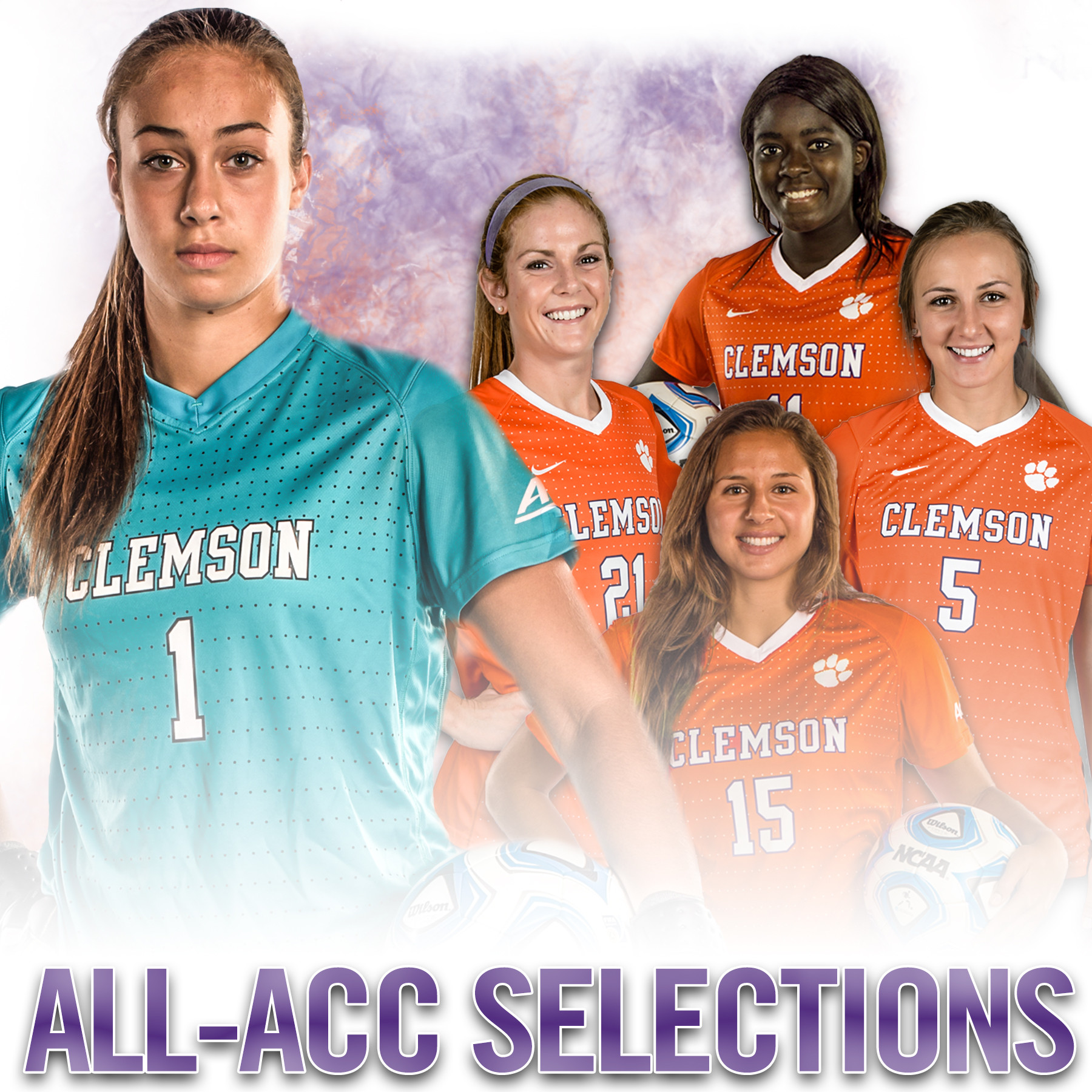 CLEMSON, S.C. – Five members of the sixth-ranked Clemson women’s soccer team earned All-ACC honors for their play during the 2015 regular season, as voted on by the ACC coaches and announced by the conference office on Thursday. Four Tigers, all juniors – Kailen Sheridan, Catrina Atanda, Abby Jones and Claire Wagner – were named to the All-ACC team, while rookie Sam Staab was named to the ACC All-Freshman team. This is the first time since 2003, and only the fourth time in school history, that Clemson has had four players named to the All-ACC team.

Keeper Kailen Sheridan was named to the All-ACC First Team for the second consecutive season. Last year, she became the first Clemson player to be named first-team all-conference since 2007. Sheridan was named Third-Team All-ACC in her rookie season at Clemson in 2013. The Whitby, Ontario native has played 1,361 minutes in goal for the Tigers, accumulating 51 saves while allowing just 13 goals on the season for a goal allowed average of 0.86. She has recorded six shutouts in 2015, bringing her career shutout total to 21, tying her for second in Clemson history.

Midfielder Catrina Atanda (Belle Mead, N.J.) was named Second-Team All-ACC in 2015 for the second year in a row. She was named ACC Offensive Player of the Week on Aug. 31 after scoring the game-winning goal against in-state rival No. 8 South Carolina on Aug. 28. Atanda, who led the Tigers in scoring as a sophomore in 2014, is currently tied for the team lead in goals (5) and leads the team in scoring with 13 points. She also has a team-best four game-winning goals this season.

Midfielder Abby Jones and defender Claire Wagner were both to the All-ACC Third Team. It is the first career all-conference honor for both players. Wagner was named ACC Offensive Player of the Week on Sept. 21 after she scored the game-winner in the 102nd minute to lift the Tigers to a 1-0 upset over then-fifth-ranked Notre Dame on Sept. 19. The native of Cary, N.C. has three goals and five assists in 2015. Jones, from Auburn, Ala., has tallied two goals and three assists in 2015, and has started all 17 contests in the midfield for the Tigers.

Freshman defender Sam Staab was the Tigers’ lone ACC All-Freshman team honoree. The San Diego, Calif. native has started all 17 games of her rookie season, playing 1,540 minutes on the Clemson back line. She leads the team in assists (7) and is tied for second on the team in points with 11, as she also has two goals on the year.

Clemson travels to Cary, N.C. this week to face No. 1-ranked Virginia in the semifinals of the 2015 ACC Tournament on Friday, Nov. 6 at 5:30 p.m. at the WakeMed Soccer Park. This is Clemson’s first appearance in the ACC Tournament since 2007, and the Tigers look to claim their first conference tournament title in school history. Tickets for the ACC Tournament are available here: http://theacc.co/WSOC15tix.