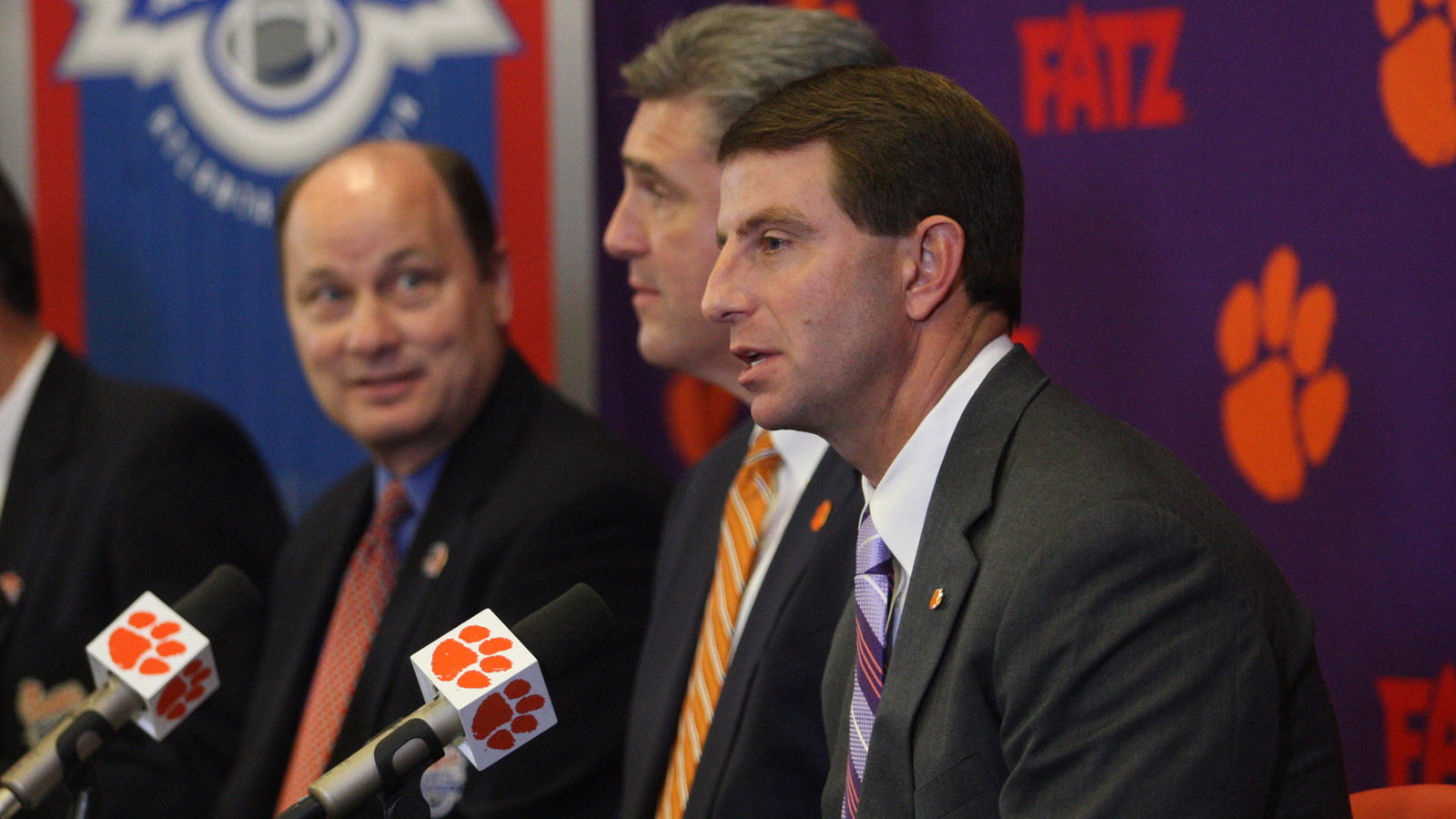 CLEMSON, SC – Dan Radakovich is confident he won’t have any trouble finding his way to the Georgia Dome on New Year’s Eve.

“I’m very familiar with the town,” he joked.

Radakovich, of course, came to Clemson by way of Atlanta, where he was the athletic director at Georgia Tech before taking over the same position at Clemson last week.

On Friday, Radakovich formally accepted an invitation for the Tigers to play in the Chick-fil-A Bowl against No. 7 LSU during a news conference with bowl officials at the West End Zone.

“On behalf of Clemson University, Clemson Athletics, Coach (Dabo) Swinney, the players and the thousands of IPTAY donors across the state and the country, we proudly accept this invitation,” Radakovich said.

In doing so, Clemson will make its eighth appearance in the 45 installments of the Chick-fil-A Bowl, making it the game’s most frequent participant.

The Chick-fil-A Bowl has been one of the best-attended bowl games in the nation, as Stokan said it is expecting its 16th straight sellout, a streak that ranks behind only the Rose Bowl among bowl games. The game will be televised Dec. 31 at 7:30 p.m. by ESPN in an unopposed, primetime slot.

The bowl has also consistently been one of the most competitive games in the bowl season, as 24 of the 44 previous games have been decided by a touchdown or less. Since the bowl became an annual ACC-SEC matchup, each league has won 10 times.

Clemson Head Coach Dabo Swinney spent this week on the road recruiting and said he had not even had a chance to start studying film of LSU since he’d been out of his office since the matchup was announced Sunday night.

“But listen, I know enough about LSU, I don’t have to turn the film on,” he said. “I’ve seen them for a long time and have had an opportunity to watch them several times. This is a complete football team.

“This is a team that played for the national championship not even 12 months ago. And against the team that’s playing for the national championship, Alabama, if not for a screen pass on the last play of the game, we’re probably not playing this team. So this is a very good football team, as good a team as there is in the country, and you have to be complete to be in that category.”

Clemson’s players began work for the bowl game this week with running and lifting and also had “skill and drills” Tuesday and Thursday. The team will officially begin bowl practice Saturday morning.

On the injury front, Swinney said he doesn’t anticipate cornerback Darius Robinson (ankle) being able to take part in the bowl, but is “hopeful” fellow corner Bashaud Breeland (groin) will be available.

“It would be a nice shot in the arm if we could get a healthy Breeland back,” he said.

No. 13 Clemson comes into the game after its first 10-win regular season since 1981, but also with a bitter taste in its mouth after losing its regular season finale 27-17 to rival South Carolina.

All-American quarterback Tajh Boyd said the Tigers are eager to prove their mettle against one of the nation’s elite programs.

“But we didn’t come with our best foot forward that day either, and we didn’t help ourselves out. So this is another opportunity, another stage for us to go out there and show what type of team we are.”

The Tigers are also excited about moving into their new 80,000 square foot indoor practice facility. Swinney said the facility is finished and they are just awaiting a certificate of occupancy before moving in.

“We definitely should be in there in the next few days,” he said. “So we’re really excited about that. If there’s a nicer indoor facility out there, I’d just have to see it. This place is spectacular, and I can’t say thanks enough to our administration and IPTAY for what they’ve provided our student-athletes.

“It is a game-changer – not just in recruiting, but for our program and development of our program. I think it will add a little bit of swagger to our guys’ step as we get back there for bowl practice.”