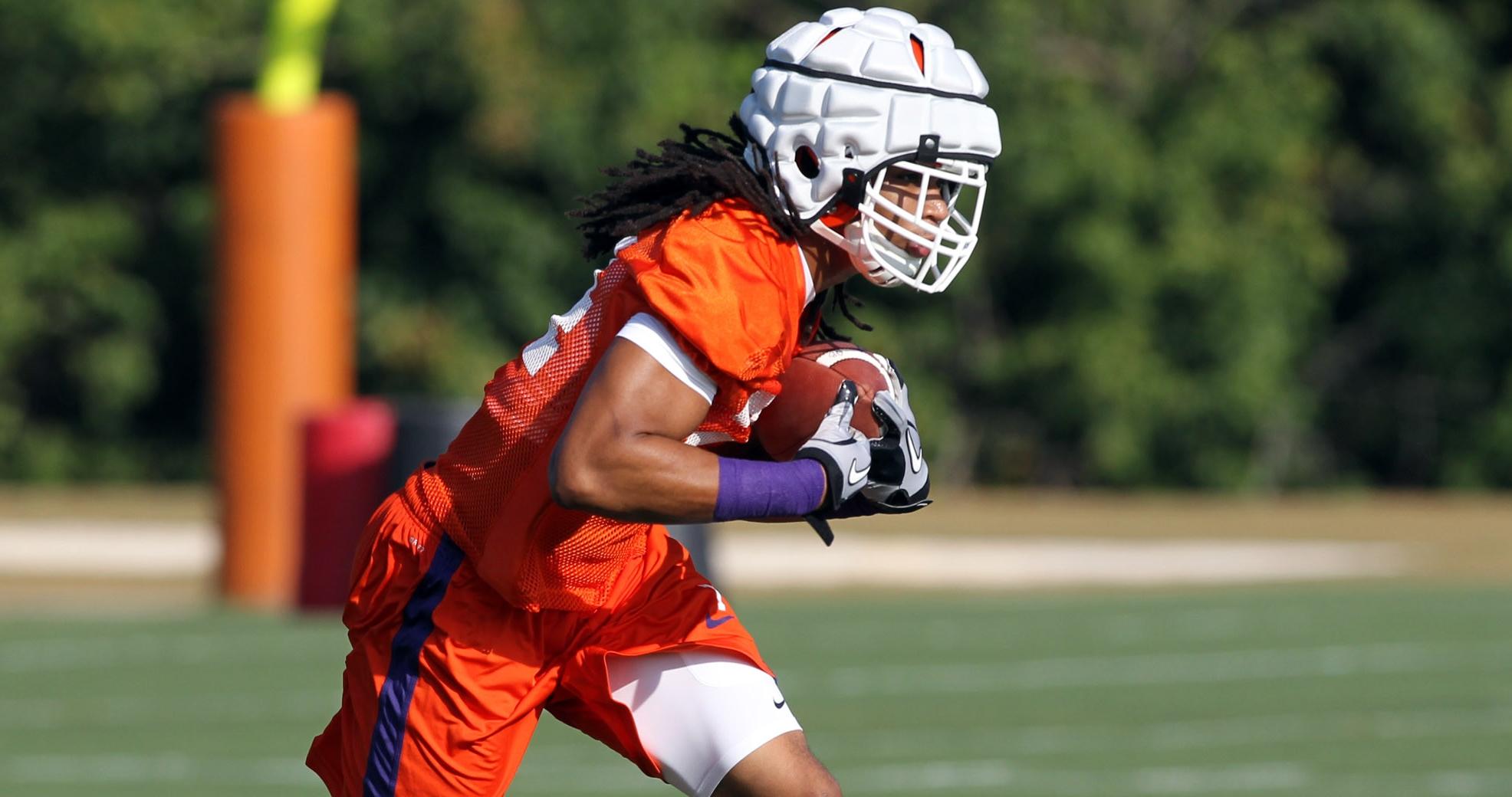 CLEMSON, SC – Zac Brooks has what many of us would consider a good problem: He has to actively try to gain weight.

The sophomore running back says he received frequent text messages from coaches in the offseason reminding him to drink an extra milkshake before a workout or eat an extra protein bar before a session in the weight room so he doesn’t burn through calories too quickly.

One of Clemson’s graduate assistants even brought Brooks a protein shake while he sat down after practice this week to do the interview for this article.

“I don’t think anybody drinks more of the milkshakes than I do,” Brooks laughed.

The results are paying off. After showing up on campus as a freshman weighing 178 pounds, Brooks tipped the scales at 198 for the team’s official weigh-in prior to fall camp. He admits he drank a great deal of water beforehand to achieve that number, but said he consistently weighs in at 195 these days.

But it’s not the milkshakes that have helped Brooks most when it comes to packing on pounds. It’s his mother’s home cooking. “Last Sunday they cooked me dinner and brought it home for me, so I ate beans and rice and yams,” Brooks said.

“I’m eating well. It’s a matter of eating when you need to eat, doing what you’re supposed to do and being disciplined in your eating habits.”

It certainly hasn’t hurt that Brooks is getting a lot more home-cooked meals lately. He came to Clemson from Jonesboro, Ark., making him the first Tiger from the state of Arkansas since Steve Carr in 1976. Since Carr never played in a game, Brooks became the first Arkansas product to play for Clemson in school history last season.

Being from Arkansas also meant Brooks had one of the longest road trips on the team when it was time to leave campus and head home. For the Chick-fil-A Bowl, he remembers driving from Clemson to Arkansas, back to Atlanta – in the rain – then back to Arkansas and finally back to Clemson in short succession.

Brooks took it in stride and says he could make the drive from Clemson to Arkansas in eight-and-a-half hours if he hit the traffic in Atlanta and Memphis just right.

But these days he doesn’t have to worry about that anymore.

Both his parents, as well as one of his older sisters and his younger brother, moved to nearby Anderson in May. “Now it’s 20 minutes (away),” Brooks said. “You can’t beat that.”

Brooks said the decision to relocate was an easy one for his parents, whom he said are nothing if not supportive of their children.

“It was nothing for them,” Brooks said. “I’m trying to tell you – there’s nothing that my parents won’t do for me. As long as we’re doing right, my dad and my mom will have our back through thick and thin.”

With his family close by and his weight on the rise, Brooks said he has entered fall camp this year with a much different outlook than he did as a freshman.

“I guess I’ve matured because my eyes are really open to camp now,” Brooks said. “I really see it as an opportunity rather than a drag.”

But Brooks has plenty of competition at running back also looking for opportunities. He came into camp third on the depth chart behind senior Rod McDowell and junior D.J. Howard, but the competition has only increased with the addition of talented freshmen Tyshon Dye and Wayne Gallman since camp has begun.

Still, running backs coach Tony Elliott believes Brooks has plenty of ability when it comes to blossoming into a standout running back for the Tigers.

“Zac has the potential to put it all together and be a complete back – like an Andre Ellington – because he can catch the ball so well out of the backfield, he’s really learning how it feels to be a running back because he’s doing it each and every day, and he’s got the athletic ability,” Elliott said. “Once he puts it all together he could be that complete guy.”

Between the undersized, but explosive McDowell, the workmanlike Howard and the two newcomers, along with himself, Brooks has high hopes for the stable of backs, and knows it will be difficult for any of them to earn the lion’s share of the carries.

“All our guys have worked hard at catching, we’ve all got good speed – all of us in that 4.3 or 4.4 range – and we’re just a good combination,” Brooks said. “I just feel sorry for the coaches when it’s time to make that decision.”

Brooks had 119 yards on 26 carries and three receptions for nine yards in 65 snaps last season, but appears set for a larger role this year.

Having packed on 20 pounds since arriving at Clemson, Brooks said the competition at the running back position is making him push himself to continue improving.

Except when it comes to his parents’ house, which is right down the road these days.