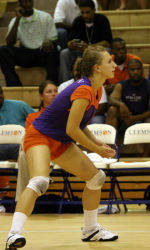 CORAL GABLES, FL – Clemson volleyball rookie Didem Ege set the school single-season record for digs by a freshman in the Tigers 3-1 victory over Miami in Coral Gables, FL on Sunday afternoon. Ege finished the match with a career-high 32 digs to give her 396 on the year, bettering Julie Rodriguez’ mark of 378 set in 1993.

With the win, Clemson improved to 16-7 overall with an 11-4 record in the ACC. The loss dropped the Hurricanes to 9-16 overall and 6-10 against league competition.

Jeannette Abbott led the Tigers with 15 kills in the match, while Miami native Danielle Hepburn recorded 13 kills and eight block assists. Overall, Clemson posted 13 total team blocks in the contest to go along with 85 defensive saves.

Frannie Savage had a match-high 16 kills for the Hurricanes, while Casilia Loessberg tallied 28 digs on the afternoon.

After trading the first few points in the opening game and being edged slightly by the Hurricanes, Clemson utilized two five-point rallies to gain a 10-point lead at 24-14. The first run put the Tigers ahead, 19-11, as Meghan Steiner tallied two kills and a block assist during the stretch. Miami responded with three straight points before Clemson’s second rally. After the Hurricanes posted their 15th point, the Tigers put up points 25, 26 and 27 on kills by Lia Proctor and Hepburn and a block by Hepburn and Leslie Mansfield. Clemson went on to win the game by a score of 30-18.

Miami countered with a win in game two, 30-23, as the Hurricanes scored 10 of the first 12 points of the game. They matched the 10-point advantage at 24-14 before the Tigers were able to narrow the gap. Clemson scored seven of the final 10 points in the game, but it was not enough to overcome the early deficit. Ege’s record-setting defensive save led to Clemson’s 21st point of the game, as the dig kept play alive for a Hepburn block solo.

The Tigers jumped out to the early lead in game three with a six-point run that included three kills by Proctor and put them ahead 7-3. Clemson increased its advantage to as many as seven points at 13-6, 15-8 and 17-10 and 28-21. Miami rallied to cut the gap to just two points with a five-point run and avoided game-point with a kill, but the Tigers claimed the game, 30-27, for a 2-1 lead in the match.

Game four was a tight affair in which Clemson prevailed by a narrow 30-28 margin. The Tigers led, 16-9, early in the game but saw their lead dwindle to just two points after a six-point Hurricane run at 22-20. Miami then tied the game at 24 apiece before Clemson responded with two points of its own. The teams then traded points for the remainder of the game, as the Tigers would not allow the Hurricanes back within two points.

Clemson will remain on the road next weekend as it will face North Carolina and NC State. The Tigers will take on the Tar Heels in Chapel Hill, NC on Friday and then battle the Wolfpack in Raleigh, NC on Saturday.