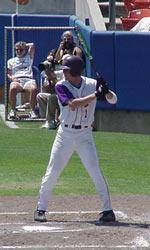 CLEMSON, SC – Second seed East Carolina rebounded from a loss to Clemson just hours earlier to defeat Georgia Southern 7-3 in the Clemson Regional Saturday night at Doug Kingsmore Stadium. The Pirates (43-19-1) move on to a rematch with Clemson Sunday afternoon at 2:00 PM in the Regional Championship Game while the Eagles (39-25) have been eliminated.

Kieran Mattison (2-0) earned the win for East Carolina after one scoreless inning of relief. Brian Harrison (1-3) suffered the loss for Georgia Southern.

East Carolina started the scoring in the third inning. Ryan Jones scored on a groundout by Warren Gaspar and Clayton McCullough knocked in Sanderson with a two-out single to put the Pirates ahead 2-0. Georgia Southern got on the board in the bottom of the frame when Chris Walker’s groundout scored J.R. Revere. The Eagles then took a 3-2 lead in the bottom of the fourth with consecutive two-out, RBI-singles by Rocky Baker and Revere.

After two scoreless innings, East Carolina took command of the game with a four-run seventh. The Pirates got RBI-singles from Darryl Lawhorn, McCullough and Bryant Ward before Georgia Southern reliever Harrison recorded an out. McCullough scored later in the inning on a sacrifice fly by Luke Cherry that gave the Pirates a 6-3 lead.

East Carolina added a run in the eighth inning to make the final margin 7-3. Pirate reliever Neal Sears entered the game in the seventh inning and pitched three scoreless innings for his ninth save of the season. The appearance was his 33rd of the year, which sets a new ECU single season record.

Lawhorn, McCullough, Ward and Ben Sanderson each had two singles to lead the Pirates in the game, which did not see an extra base hit from either team.