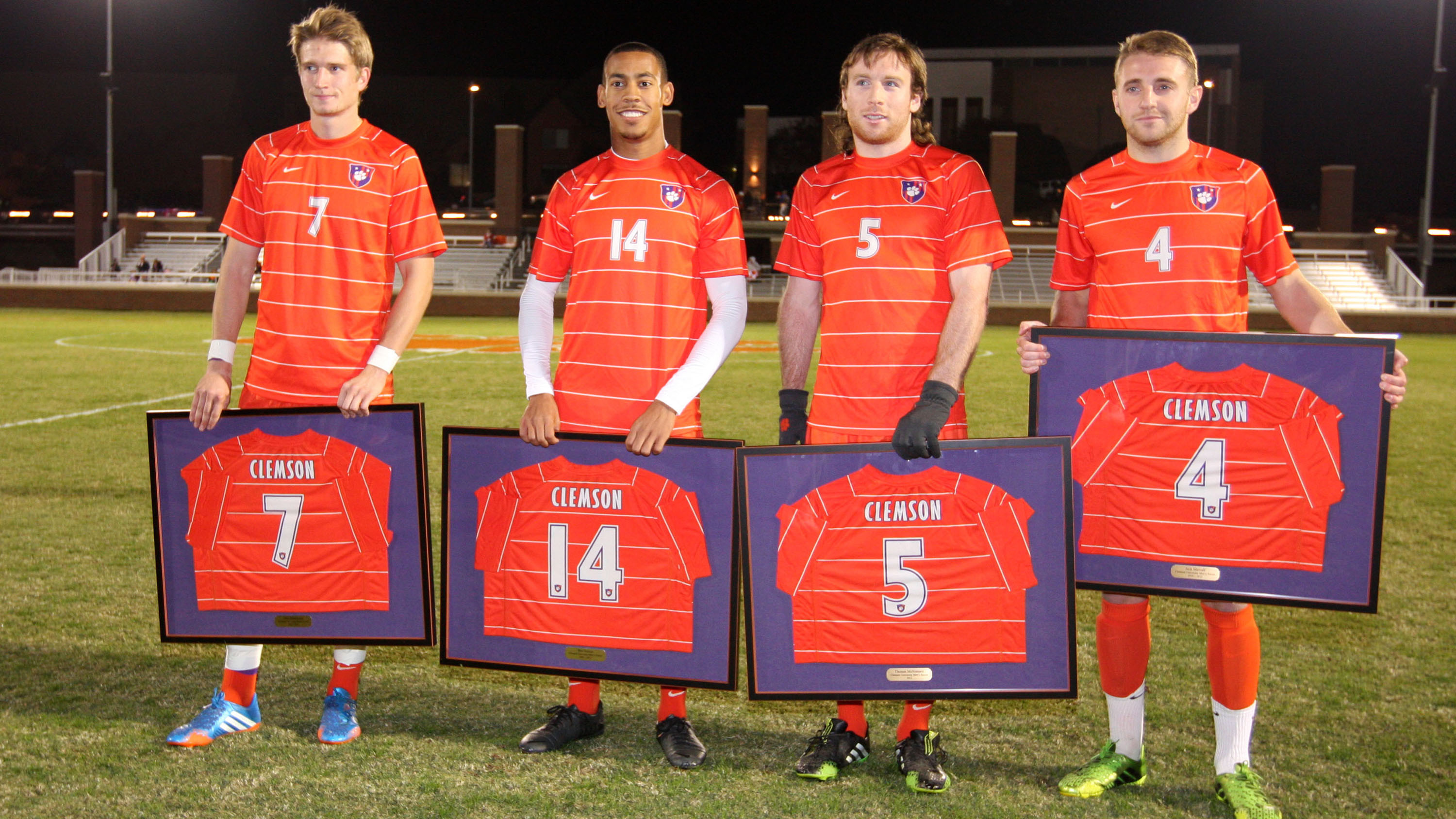 CLEMSON, SC – Tomas Coulter scored the game’s lone goal in leading Duke to a 1-0 victory over Clemson in an Atlantic Coast Conference men’s soccer match at Clemson, SC Friday night.   With the win, Duke improves to 8-4-6 overall, 3-3-5 in the ACC.  Clemson falls to 10-6-2 overall, 5-4-2 in league play.   However, Clemson will play host to North Carolina Tuesday night at 7:00 p.m. at Historic Riggs Field in the quarterfinal round of the ACC Tournament.  The Tigers will be the fourth –seeded team in the tournament.  The Tar Heels will be the fifth seed.  North Carolina lost to N.C. State tonight, 1-0 in overtime to ensure that the Tigers will be hosting a ACC Tournament quarterfinal round match.   Duke’s Zach Mathers served the ball from the left to Brody Huitema in the box.  Huitema headed the ball from the right in the air to the middle of the box near the penalty mark.  Coulter did an overhead kick and sent the ball into the lower left corner of the goal beating Clemson’s goalkeeper Andrew Tarbell to his right.  This was Coulter’s first goal of the season.   Clemson had two chances late in the game looking for the equalizer.  Ara Amirkhanian had a shot in the box with 3:13 remaining in the game, but the Duke goalkeeper Alex Long was there to make the save.  The Tigers’ Bobby Belair took a shot with :37 left in the contest but his effort went wide.   “It was a good competitive game,” said Clemson Head Coach Mike Noonan.  “It was a contrast in styles.  They won the battle of the box.  We must find a way to score and finish our chances.  The energy level was there, the effort was there, but the end product wasn’t there.  I thought our guys played well, they just didn’t win the scoreboard.   “I thought Amadou Dia played well, Tommy McNamara played well, and Andrew Tarbell was very alert and had a good game.  The back line and Tarbell did another  good job. “This team is very resilient.  I know we will work hard to prepare for North Carolina in the quarterfinals of the ACC Tournament.”Scoring Summary Duke – Tomas Coulter (Zach Mathers, Brody Huitema) 77:07   Shots:  Clemson 11, Duke 11 Corner Kicks:  Clemson 6, Duke 3, Saves:  Andrew Tarbell (CU) 2, Alex Long (D) 4 Fouls:  Clemson 8, Duke 9 Attendance:  2,438