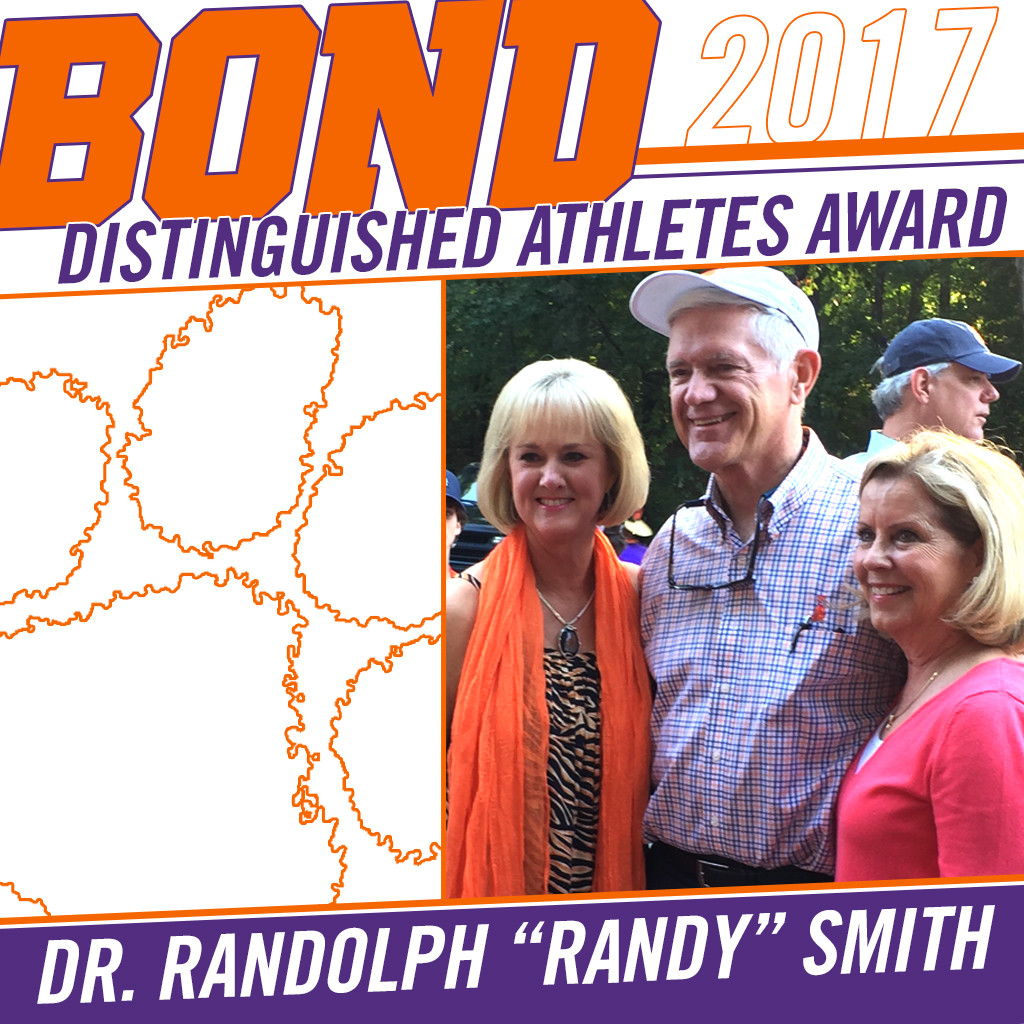 Margaret Bond and her late husband, former Clemson golfer Steve Bond, have been lifelong supporters of Clemson University. A few years ago, the couple decided to leave a legacy at their alma mater that would not only honor former Clemson student-athletes, but would recognize them for success that was measured off the field of athletic competition. The Bonds wanted to give attention to those who have gone on to do great things after they leave Clemson.

The Bond Distinguished Athletes Award was created to honor Tiger athletes who exemplify character, citizenship and service. To qualify, you must have lettered in your sport, be ten years or more past your graduation date and have given back in some way to the University and your community. The award is symbolized by a customized gold ring, which is presented each year at a Clemson football game. The recipient’s name is displayed on a plaque in the Nieri Family Student-Athlete Enrichment Center.

Sadly, Steve Bond passed away in August 2013, just a few months before the first award was presented. Margaret recalls, “Although Steve did not get to see this award to fruition, he and I worked together to establish the criteria and design the gold ring. The Clemson Nation has an abundance of former student-athletes who have become great citizens. Steve used to say the hard work, dedication and loyalty he learned being a student-athlete were qualities you can take with you in life after you graduate.”

This year’s Bond Distinguished Athlete exemplifies the characteristics that the Bonds had in mind when they first conceived of the award.  Highly skilled surgeon. Humanitarian. Athlete. Veteran. Community leader. Proud family man. And proud Clemson Tiger. All these terms aptly describe Randolph R. Smith, M.D., Clemson alumni and one of the South’s top plastic surgeons. We honor him today on the field where he played for the Tigers almost fifty years ago with the 2017 Bond Distinguished Athletes Award.

Margaret Bond said, “I am so proud to name Dr. Randy Smith as the 2017 recipient of the Bond Distinguished Athletes Award. Showing exemplary character and having an unbelievably giving spirit, Randy is a perfect fit for our award. He embodies the exact qualities my late husband, Steve, and I set out to honor and recognize.”

Randy Smith ’66, was one of those athletes who wanted more out of life than gridiron glory. A star lineman for Coach Frank Howard, Smith was talented enough to receive offers to play in the NFL for both the New York Jets and the Atlanta Falcons. But driven by a sincere desire to serve others, he decided instead to study medicine. He graduated from the Medical College of Georgia in 1970, and began a successful practice in plastic and reconstructive surgery in Augusta, Ga.

During his years of education and early practice, Smith’s heart never shifted from the desire to help others. He began a lifetime of volunteer service as a surgeon in developing countries in Central and South America, Asia, Europe and Africa. His annual medical mission trips have taken him around the world and allowed him to realize his own American dream of serving others. He has performed life-changing surgeries on thousands of patients with burns and congenital deformities, working in conditions with extremely limited resources.

Margaret and Steve Bond chose to honor accomplishments of Tigers who made a difference in the lives of others. They chose to focus not on the moments of athletic glory, but on the quiet moments of service and sacrifice that often do not make headlines. Dr. Randy Smith is certainly such a person.