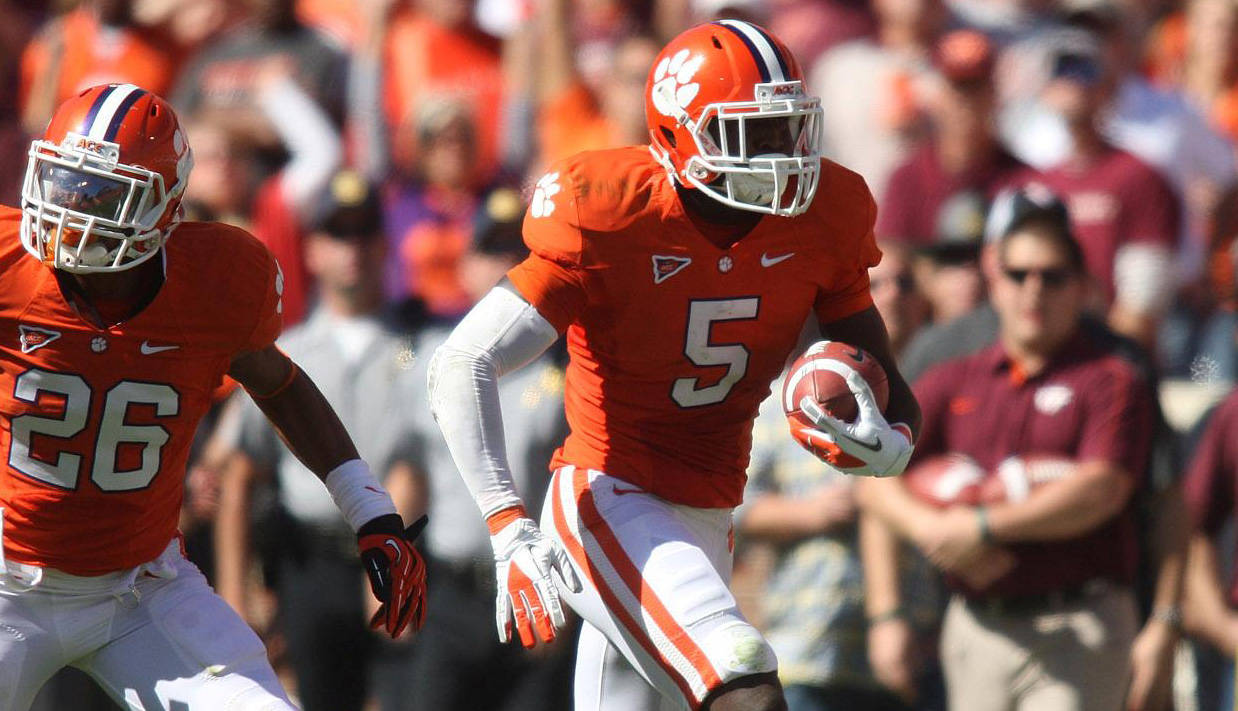 CLEMSON, SC – In a game where its offense uncharacteristically struggled, Clemson’s defense rose to the occasion, coming up with a season-high three interceptions and holding Virginia Tech to just seven second-half points in a 38-17 win Saturday on Military Appreciation Day at Memorial Stadium.

“We improved today,” defensive coordinator Brent Venables said. “I’m really happy for the guys. … We’ve got good enough players to play really good, quality defense. And this is the first time you feel like it wasn’t just one quarter, you played well enough for four quarters to give yourself a chance to win.”

“The reason that’s a big deal is that’s a step in the right direction toward creating a culture that I think you have to have if you’re going to be a great program and a consistent program – you’ve got to win at home,” Swinney said.

But after Clemson’s offense went three-and-out to open the contest, the Hokies (4-4, 2-2) found the end zone seven plays later when Logan Thomas hit Corey Fuller for a 29-yard touchdown and a 7-0 lead with 10:28 to go in the first quarter.

The Tigers broke onto the scoreboard themselves with the final play of the opening stanza, as Chandler Catanzaro made a 27-yard field goal to cap a 13-play, 73-yard drive. The defense helped set up the score by stopping the Hokies on a fourth-down play at the Clemson 18, with Corico Wright and Corey Crawford combining for the stop.

Clemson took its first lead with 9:29 to go in the second quarter when Tajh Boyd leapt over the line from one yard out for a touchdown and a 10-3 lead. The Tigers caught a break to set up the score, as they had been forced to punt, but Spencer Benton‘s kick bounced off a Virginia Tech player and was recovered by Tony Steward at the Tech 26. Six plays and 1:53 later, Boyd cashed in.

“Creating that turnover on special teams was huge,” Swinney said. “Tony coming up with that and giving us some momentum – we talk about that all the time, making an impact on special teams, and we did that.”

The Clemson defense then added to the lead, as Jonathan Meeks picked off a Thomas pass at the Tiger 26 and raced 74 yards for a touchdown to make the score 17-7. The interception was Meeks’ second of the day and the seventh of his college career.

“The two receivers ran some underneath, shallow routes and (Thomas) overthrew the guy.  I was able to get a good break on it, the guys blocked for me and helped me take it to the house,” Meeks said.

Virginia Tech pulled back within one score before halftime, as Cody Journell made a 40-yard field goal with 0:03 to go until the break to cap a nine-play, 52-yard drive.

The Tigers stretched their lead back out to 24-10 with 4:30 to go in the third quarter on a 12-yard run by Andre Ellington, who started outside, cut back inside and beat a pair of Tech defenders to the goal line for his eighth rushing touchdown of the season and the 35th of his Clemson career.

“He doesn’t lose a lot of yards, and it seems like he is always moving,” Swinney said of Ellington.

The touchdown was set up by a 27-yard connection down the sideline from Boyd to Sammy Watkins two plays earlier that put Boyd over the 6,000-yard mark in his career. He finished the day with 6,065 passing yards for his career to move past Woodrow Dantzler for second all-time in Clemson history.

After the Tigers’ defense forced a three-and-out, Boyd hit DeAndre Hopkins for a 37-yard touchdown in the corner of the end zone just three plays and 50 seconds later to extend the Clemson lead to 31-10 with 0:50 to go in the third quarter.

Clemson was forced to punt after just one first down on its next drive, however, and Thomas scored on a 19-yard run four plays later to cap a 61-yard drive and make the score 31-17 with 9:52 to go.

The Hokies forced a quick three-and-out and tried to throw a wrinkle at the Tigers in hopes of making it a one-score game. Thomas threw a lateral to receiver Marcus Davis, who gathered himself and threw downfield on a third-and-short play. But, Davis’ pass was picked off by Xavier Brewer to set Clemson up at the Tech 41.

From there, Clemson killed off most of the clock with a nine-play, 5:22 drive that culminated in a one-yard touchdown from Boyd that put the game out of reach and provided the final margin with just 1:33 left to go.

“This was big for our team,” Meeks said of the defense’s effort. “This will make the team bond a little better and know we’ve got each other’s backs.”

Clemson’s defensive performance was highlighted by Meeks’ two interceptions, as well as fellow senior safety Rashard Hall, who had a game-high 12 tackles, and the play of Jonathan Willard and Spencer Shuey, who had 10 and nine stops, respectively.

“Our defense is just continuing to get better,” Swinney said. “Anybody that’s really paid attention to us, especially the last three games, we’ve improved and we’re getting better. They’re playing with great energy.

“They’re taking pride in knowing what to do. They’re starting to really understand it and apply the lessons that they’re learning from week to week, and it’s showing up.”

The Tigers now have a short week of preparation before they travel to Winston-Salem, NC, for a Thursday night tilt against Wake Forest at 7:30 p.m. on ESPN.